May 09, 2013
Lately, I've been craving for pancakes. Yes, visions of fluffy, pillowy soft pancakes with real maple syrup and butter has been flooding my mind for days. It doesn't really help that I can't find even a single box of pancake mix in our nearby supermarket and to make it worst, I saw photos of this not-so-recent brunch get-together that Paul and I had back home while organizing my files tonight. Once again, my mouth watered at the sight of a stack of 6 pancakes with blueberry syrup and a scoop of butter on top. Oh, sheer torture. Wish I can just quickly hop on the plane to have brunch in Manila once again.

Well, call me crazy but I shall be telling you more about that practicular brunch experience at this relatively new restaurant called Maple in San Antonio Plaza near Forbes Park. Operated by the same group who's running Pancake House, Maple actually has a similar concept but it brings a more premium feel. While I will always go to Pancake House for their Tacos, Chicken Asparagus Sandwich and their Bacon Waffles; Maple's line up deviates from the local, homemade feel and is leaning towards a more gourmet and international approach.

We were joined by some members of the Food Club for this brunch session and these were the dishes that we were able to try that day: 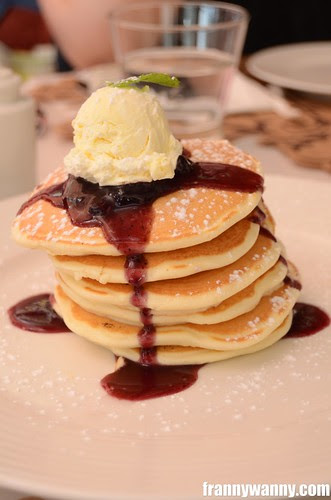 Okay, let me begin with the pancakes. Maple's Blueberry and Cream Cheese Pancake Tower (Php. 450) was truly a sight to behold. It's really too beautiful to eat but hey, these pancakes were calling out to me that day so I just let my fork dove straight into them right away. No turning back and definitely no regrets here. I enjoyed the perfect consistency of the pancakes which was no surprise as the owners of Maple sure know their pancakes by heart.

Actually, we had pancakes for dessert so allow me to backtrack a bit. 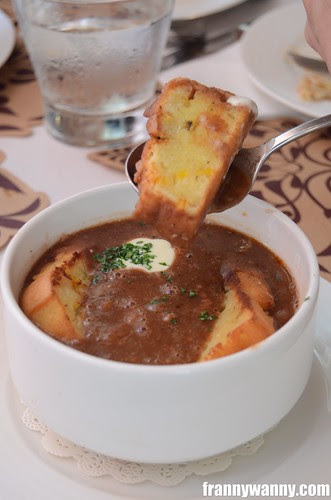 We began with a bowl of Chili (Php. 250) each. I love chili as it's the kind of tomato-based soup that's just right for me. Not too tangy, not spicy (despite the name) and it's filled with beans, beef, veggies and topped with sour cream. Nothing can go wrong in a bowl of chili except that I wasn't too impressed with Maple's Chili. The bread tasted artificial and they just added way too many toasted bread in the bowl that I could hardly appreciate the full flavor of the soup. 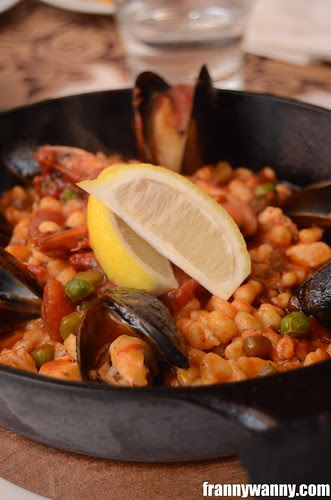 We tried the Spaetzle Jambalaya (Php. 390) which was pretty good. Our companions Richard and Irene have tried Maple prior to this particular visit and they were raving about this. It's an interesting pasta dish made with Jambalaya sauce, shrimps and mussels and cooked in a piping hot skillet. 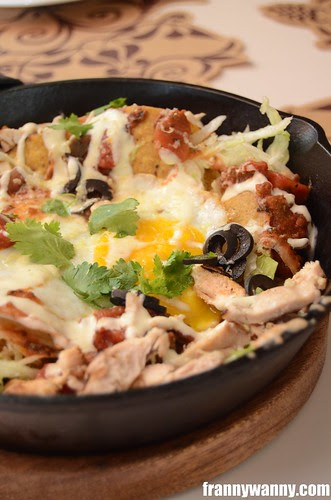 Another skillet entree which got my seal of approval was the Huevos Rancheros (Php. 340). I think I must have been Mexican in my past life as I just love all things Mexican. The Huevos Rancheros is a traditional Mexican breakfast made with tortillas, beans, grilled chicken, sunny side up egg, cheese and ranchero sauce. The way to enjoy this is to mix everything together and to eat it with gusto. Ole! 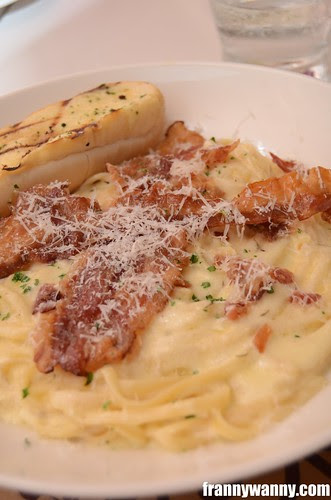 For those who wanted the classic pasta dish, we had the Maple Bacon Carbonara (Php. 350) which was..well, your typical carbonara. I would have preferred that the bacon was crunchier and the dish less creamy. 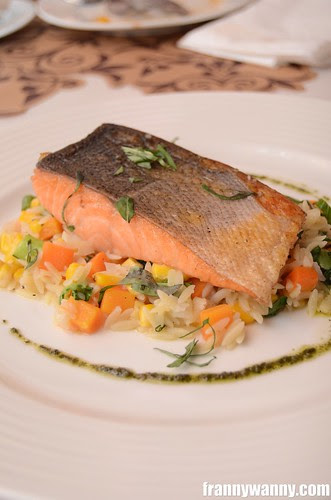 The Maple Salmon Catch (Php. 550) is a must-try. I personally enjoyed the fresh salmon fillet which may be grilled, pan-fried or seared depending on your preference. It was served on top of a generous serving of rice veggie mix. The salmon was fresh and very juicy. We had it seared and will try the pan-fried version next time. 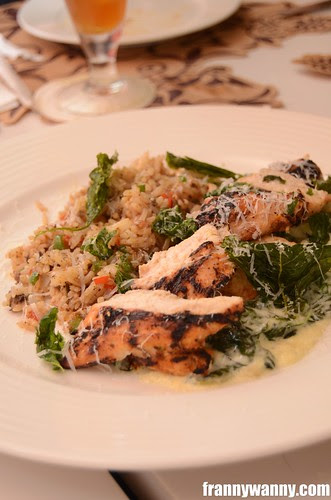 We also had the Blackened Chicken (Php. 450). Sadly, I wasn't able to try this as I was busy attacking the Spaetzle Jambalaya in front of me. Paul and the others did though and said it was a-okay. This is perfect for those who wants a healthier meal -- chicken breast with spicy Cajun rub, grilled and served with creamed spinach, bacon (oops! so much for healthy haha) and rice. 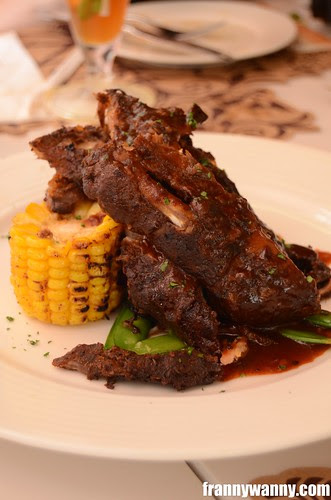 As the old saying goes, you got to start your day with a hearty breakfast or in today's modern world -- brunch. Therefore, for the meat lovers out there, you can try the Drippin' Baby Back Ribs (Php. 850)
covered with homemade barbecue sauce and served with corn, baby potatoes and snow peas (chicharo). The meat was fall-off-the-bone tender and it was very tasty too! I think though it's still best to have this for dinner after a busy day at work. 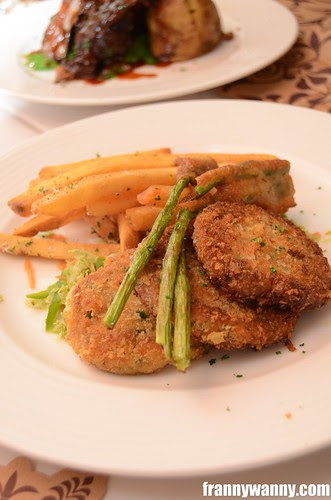 Lastly, we were also able to try the Maryland Crab Cakes (Php. 590). I really love crabs and all of its variations -- crabmeat, crabcakes, you name it! Maple's version was truly enjoyable as the crab cakes were tender inside and crunchy on the outside. I love the sweet and creamy hollandaise sauce as well as the Napa cabbage slaw that was served with it. 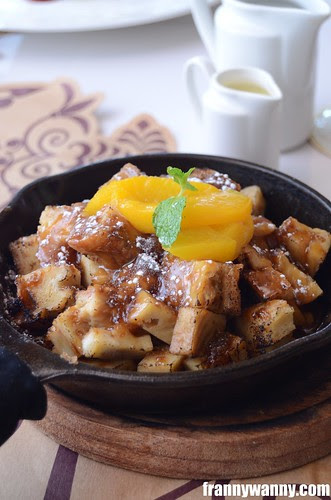 What a feast! Yet, a number of us still had space for dessert. I could barely breathe from all that food! Aside from the pancakes which were so delicious, I just had a small bite of the Apple Pie with Streusel Topping (Php. 240). I think I would have enjoyed this more if there were more space in my tummy. Nonetheless, it was pretty good to end your meal with.

The food was pretty good albeit a bit pricey. The price range is higher than most brunch places and definitely way over the top vs. it's sister company which everyone can't help but compare it with. However, I would still go back to Maple for the delicious Pancake Tower, the Spaetzle Jambalaya, the Huevos Rancheros and more of the Baby Back Ribs. I guess, most of Metro Manila loves it too (or are very much curious about it) judging how the restaurant was filled to the brim the day we went. That has been months ago though, how's the dining scene in Maple today?