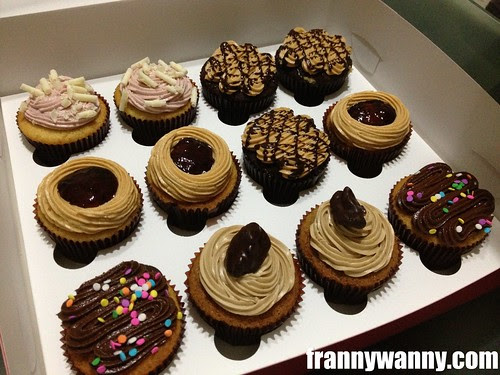 It all began a few months back when our sweet and really thoughtful flatmate I came knocking on our door. As we opened it, there she was with a big smile on her face and a bright pink box on her hand. "Gusto nyo?" (you want?) was all she said. That was our cue to nod and reach out our hands to check what was inside the bright pink box.

I tried the Red Velvet cupcake as among all the cupcakes, its one that I know makes use of cream cheese frosting. Pretty safe for someone who can't take any heavy cream. Before taking a bite, I told Paul and we should share first to avoid wastage. However, the moment I took my first bite, I looked back at him and signaled him to get his own. It was so moist and good that I'm not sharing this one! 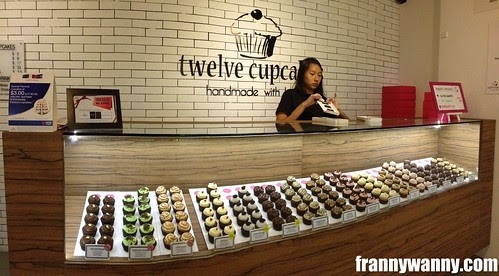 That was it. Just one bite and the name never left my mind. Twelve Cupcakes...Twelve Cupcakes it's like I'm in a cupcake trance. I began searching for all the branches around Singapore and was so happy to find out that there's one near my office and another one on the way home. It's a local brand operated by a celebrity couple Daniel and Jaime Teo. Would you believe that they've only been in operation since July 2011 and currently have 12 branches locally, 1 in Indonesia and soon, they will also open shop in Malaysia and Taiwan? Hopefully, Manila will be next.

What I love about Twelve Cupcakes is that the cupcakes are not too sweet. I just hate the feeling of biting into something that's overly loaded with sugar that it makes me cringe and regret that I ate such a sinful thing. After that memorable cupcake initiation, we've been loyal patrons of Twelve Cupcakes most especially during someone's birthday. The pretty pink box just makes a great birthday gift, don't you think? I'd love to receive one (or two) on my birthday! *wink*


On high traffic areas like their store in Vivo City, I recommend that you have to go early in order to get the full line-up of flavors available. The last time we went, there were about 4-5 flavors left with less than 10 pieces each. We literally had to fight out way to beat the other customers in line to get the flavors that we want. Survival of the fittest, cupcake style!

I've tried a number of flavors already and my favorites include: the Red Velvet (of course!), the PB Jelly (I just love how the icing has a yummy peanut butter flavor and it has a sweet jelly center), Espresso and the Strawberry Chocolate (you really can't go wrong with this one!). I have yet to try more flavors in the future, I guess I really need to go earlier to be able to check the full listing out.

To make things more interesting, they also have daily and monthly specials! I was also able to try the Salted Caramel (S$3.50) which is the special flavor for the month of May. It was so yummy! I can't wait to try the Nutella that's lined up for June.

Price-wise, I find it quite reasonable. A cupcake costs S$3 each, half a dozen (6 pcs) is S$17 and a box of twelve is S$33! This is the reason why we just get a box of twelve everytime!

Twelve Cupcakes is located at the 01-28B Golden Shoe Carpark, Singapore. They also have a branch at B2-06A Vivo City and a lot more. Click here for the full listing of their stores in Singapore.
best cupcakes cupcake cupcakes pb jelly red velvet singapore strawberry chocolate twelve cupcakes vivo city