June 27, 2013
Growing up in a country that enjoys more than a dozen non-working holidays, it took me sometime to get used to Singapore's set of 10 annual holidays and that already includes Christmas and New Year's Day. It's no wonder why majority of the people here do take note of these 10 non-working days and vacations are always planned around it. Last May 24 was a religious holiday as everyone took a break from work and school to celebrate Vesak Day which, I just found out, was Buddha's birthday.

Paul and I were no different. We made sure that we made the most of our 3-day weekend by accepting Traders Hotel, Singapore's invitation to stay for the night. Hooray for another staycation! 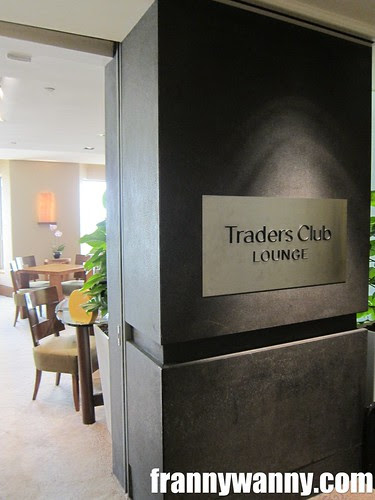 We got to the hotel a little after lunch time and were quickly ushered up to the Traders Club lounge. Since we will be staying at the a Club Room thus we can do our check-in at the lounge instead of waiting in line at the hotel's front desk. Checking in was a breeze and so high tech! All my information can be viewed using an iPad and as I affix my digital signature, this immediately gets saved into the hotel's database. As we waited (seriously, it really didn't feel like waiting at all), we were served a glass of refreshing citrus water as their welcome drink.

Soon after, our keys were handed over and off we went to our room. Look at our Club Room! Isn't it beautiful? Traders Hotel is part of the Shangri-la Hotel and Resorts group and what sets this apart from the other Shangri-la hotels is that it's a business hotel. Thus, expect Traders Hotel to be busier during the weekdays. The room had less frills yet complete with all the necessary amenities. It's smaller in size compared to probably the one's of the same category in a family/travel hotel. Nonetheless, the bed was very comfy and it made Paul and I want to just stay in the entire day. 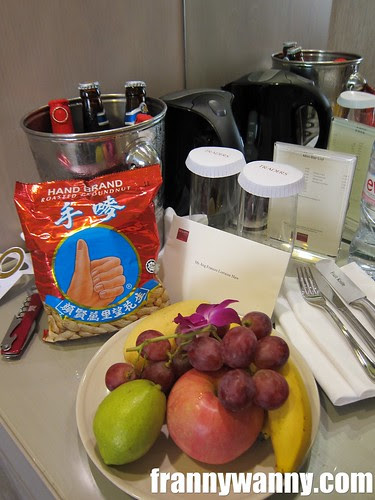 Look at our welcome platter! Most hotels would normally give fresh fruits which we appreciate a lot but to have bottles of beer, Singapore Sling and peanuts, they surely made my husband so happy that afternoon. It's party time! 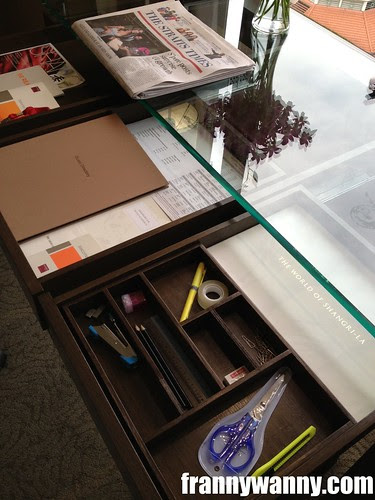 It's no wonder why Traders Hotel has been one of the top choice of businessmen traveling around the world. All rooms are complete with writing materials, Internet access and even some basic supplies! I've never been to any hotel complete with a pair of scissors, tape and stapler. 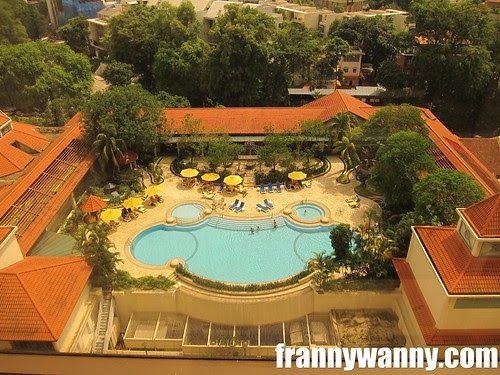 Anyway, after we settled into our room, we had to get ready for our spa treatment. Let me tell you more about it in my next entry. Yes, it was THAT good that it truly deserves a solo blog post. The spa is just one of the many facilities that you can find in the hotel. Aside from this, there's the pool which we had a good view of from our room, a fitness center, function rooms and one delicious seafood restaurant called Ah Hoi's Kitchen which I'll also be talking about in the next few days. It's also located right at the edge of Orchard Road which is nearer to the embassies and is adjacent to Tanglin Mall from the hotel's 2nd level. Don't worry though as I can assure you that going around Singapore is a breeze. There's a bus stop located right across the hotel and they also have an in-house shuttle service that'll take you to the Orchard MRT and to other Shangri-la Hotel properties and back. I made use of this shuttle service when I had to go to ION for a quick errand. It arrives on time and it'll take you to ION in less than 10 minutes. Just take note of the time schedules though to avoid delays. 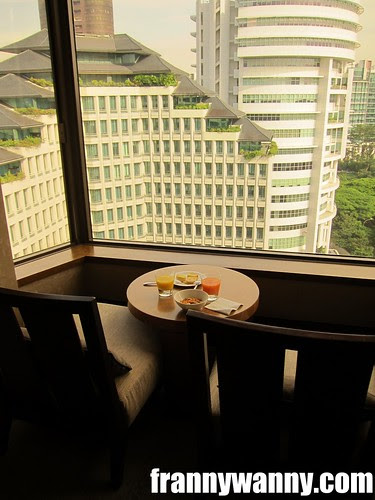 After our relaxing (and funny) spa treatment, Paul and I went back to the Traders Club lounge for some afternoon cocktails. We got these two chairs overlooking the city and sat there while enjoying our snacks, a glass of bubbly and as always, a good conversation with one another. 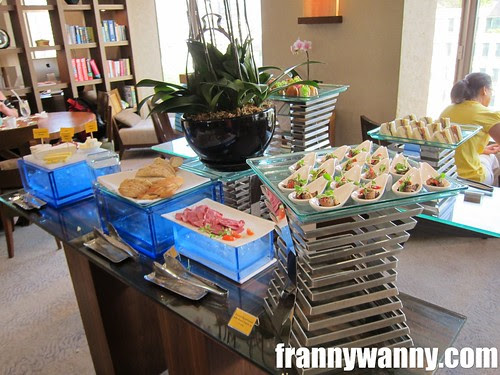 I just love afternoon cocktails and being able to just hang out at the lounge. Look at the delicious spread that we were able to indulge in that day. 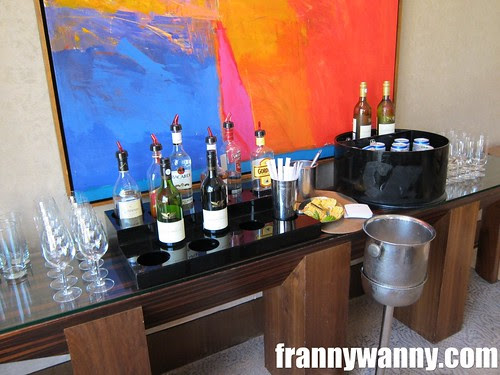 They got bottles of wines and beers too! 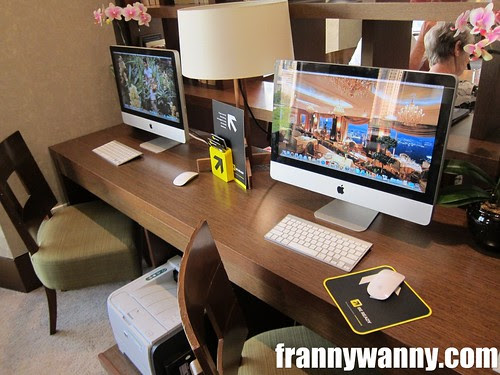 For those who needs to check their mail or to surf the internet in between bites of their snack, there are two Mac computers ready for use.

An hour after having our cocktails, we headed to Ah Hoi's Kitchen for some local seafood dinner. You just have no idea how stuffed we both felt but we still ate and ate and ate. After which, we walked around the hotel to let our food digest well before we retreated back to our room to rest.

I mentioned earlier how comfortable the bed was...a little bit too comfortable that both Paul and I slept so soundly all through the night that we woke up at 930AM! This means we have a little more than an hour before breakfast at CafeBiz is over! *gasp*

We rushed down and luckily the buffet spread was still complete. Thank goodness! 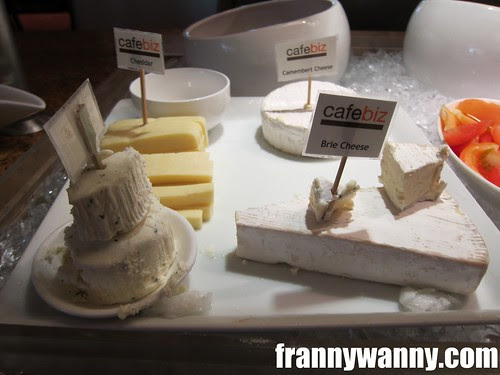 I've stayed at a number of business hotels in the past and I have to say that this just got to be the best buffet spread that I've ever had! It was so complete down to having a number of cheeses and cold cuts too! 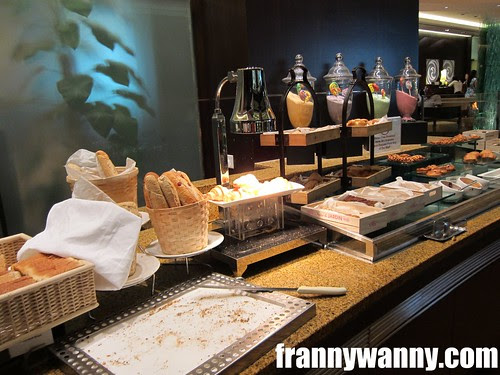 For those who have dietary requirements such as low salt, sugar-free or gluten-free, they can actually customize your bread to suit your needs. I tried the sugar-glazed donut as I miss having Krispy Kreme so much and I have to say that it was pillowy soft but a bit too oily for my liking. The sweetness level was a notch below KK's too which was good but the oiliness made me just consume a few bites and I left the rest on my plate.

I also liked the Chinese section where they had a good selection of steamed dumplings, paos and dimsum. How I wish they have those Salted Egg Paos that we tried at Shang Palace though. 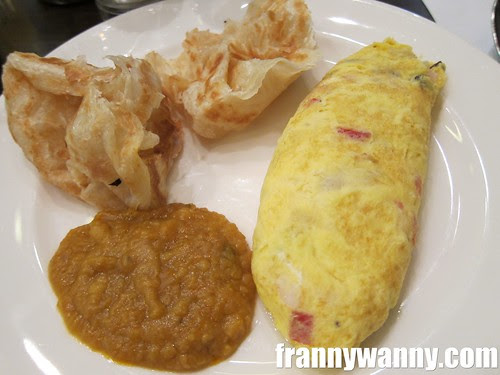 Check out my first plate -- Veggie Omelet, Plain Prata and Curry. My sister would tease me that I must be an Indian girl in my past last due to my undying love for Indian food. I'm totally addicted to the 3 yummy Ps -- Pratha, Papadum and Paneer (cottage cheese in thick curry sauce). Anyway, I was a bit disappointed though with Trader Hotel's pratha as it was so cold and hard when I tried it. It must have been left out there for hours but I wish they would make fresh ones nonetheless. 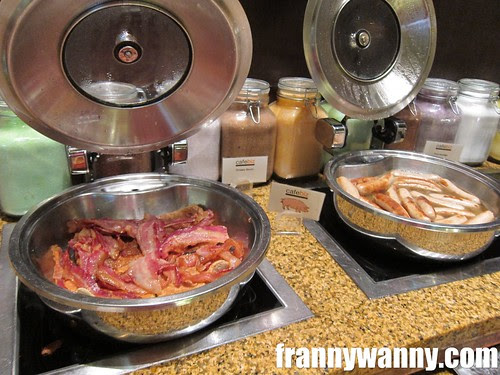 For those who wants the usual breakfast fare, they got two kinds of bacon and a number of sausages for you to choose from. They also have cereals, fruits and yogurt if you feel like keeping it light in the morning.

I just love the idea of being able to take a break from the usual routine and to just unwind but without the need to travel far. While Traders Hotel makes a great option for business travellers during the weekdays, I would highly recommend this for staycationers in need of a quick weekend break every now and then.