July 23, 2013
I must admit I'm such a sucker for love stories. The cheezier, the sappier, the better! I love it when I get to cry while watching the movie, it's such a good emotional release for me despite the slight humiliation of leaving the movie theater with red, puffy eyes. I guess, it's the romantic bone in me that I still believe that we all have our own happy ever afters, that our very own prince charming exists and when the right moment comes, he'll be there to sweep you off your feet. Cynics may think that's crazy and it's all a fairy tale but hey, my own dreams came true! 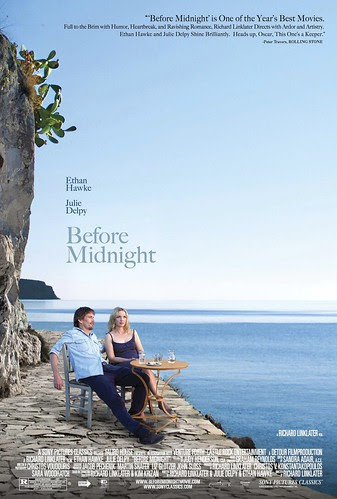 Once, I was in the mood to do a movie marathon and wanting to watch something different, I googled this -- "best romantic films of all times." Lo and behold, I got a number of lists that later on served as my guide on what videos to watch out for. Each list has its own suggestions but there are a number of movies that remains to be constant across all those list. This includes the classic Casablanca, Titanic, Love Actually and the love story of Celine (Julie Delpy) and Jesse (Ethan Hawke) which began in the 1995 movie Before Sunrise and was followed by a sequel called Before Sunset, exactly 9 years after in 2004. It has been 9 years since we last saw Jesse and Celine and I was so excited upon learning that a third film was in the works entitled Before Midnight.

Before I tell you about their latest movie, let me backtrack a bit. In 1995, young American guy Jesse was on the train enroute to Vienna where he will catch his flight home to the US. This was where he met shy and naive French girl Celine who was on her way back to Paris after visiting her grandmother. They obviously hit it off through their animated and never-ending conversations. All throughout the film, you'll watch them talking, talking and talking. Somehow though, you'll see how they'd subtly flirt and eventually fall for one another. At the end of the movie (Before Sunrise), they made a promise to meet again months after...

Moving on to Before Sunset, we catch up with a more mature looking Jesse and Celine where Jesse found himself in France for a book tour. He then met Celine again and before flying back home, they were able to catch up while walking up and down the streets of Paris. This time though, Jesse admitted that he's married with a son. However, throughout the quick talks and walks, they later on rekindled the feeling that they had the first time they met and the story ended with Jesse missing his flight home and staying with Celine in Paris.

Tonight, Paul and I were able to watch the advance screening of Before Midnight. The story is all about the married life of Jesse and Celine. Following the same story format, there were a lot of conversations between the two and they somehow remind me of Paul and I who, even after 10 years of dating and 3 years of marriage, we still have a lot of stories to be shared on a daily basis. Throughout the movie, you'll find the couple battling with bottled up frustrations and disagreeing in certain issues on family and career. There are a number of sweet moments still like how Jesse would suddenly shower Celine with kisses and how they'd still hold hands while walking after all these years.

In today's world where marriage and long lasting relationship is starting to becoming a rarity, it's refreshing to watch a movie that shows us that love can go on forever provided that the two of you are willing to make it work. I really enjoyed the scene where both Jesse and Celine were having lunch with other couples and they would share their thoughts on how they stay in love with one another.

What made the movie entertaining are the comedic scenes that Director Richard Linklater has injected here and there. I laughed when Jesse told Celine: "You are the major of crazy town!"...with exactly the same exasperated look that Paul would give me whenever we're having a dramatic episode. Somehow, I can relate with Celine's loony ways which I know would drive Paul mad at times.

Do keep your ears open to enjoy the conversation between Jesse and Celine and be ready to let your heart melt as you enjoy Before Midnight.

I won't be sharing much more info so as not to spoil the movie for you but let me leave you with one line that totally won my heart earlier this evening:


"I assure you,the guy you vaguely remember...the sweet romantic one on the train..that is me." - Jesse Wallace