- June 09, 2010
My first taste of Banapple was during a recent birthday dinner with Paul's family. His mom gave me a box of Banapple's signature Banoffee Pie and I just have to say it was love at first bite. 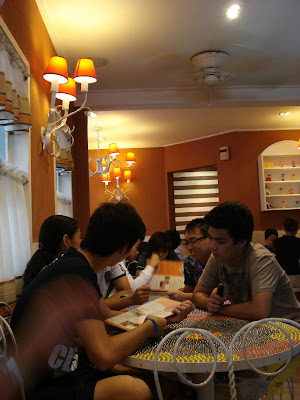 Not long after, we ended up having lunch there after running a couple of errands. It was a Sunday and we were surprised to see the place PACKED! It was brimming with families, couples and young students from nearby universities. What I don't get is that, once again, it was a weekend and school has not officially started yet. 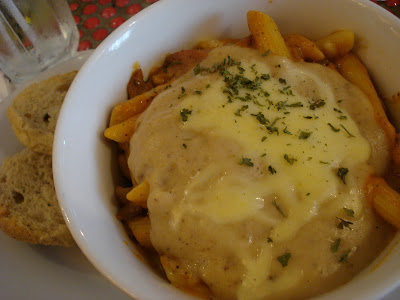 Luckily, we were able to get a table right away and we were given laminated menus to choose our orders from. Paul's mom mentioned that she liked the Baked Creamy Cheezy Penne (P155). She told me it was delicious and the noodles were al dente. While I still managed to browsed through the menu, my mind was already on the Cheezy Penne and so this was my choice as we reached the counter to place our orders. 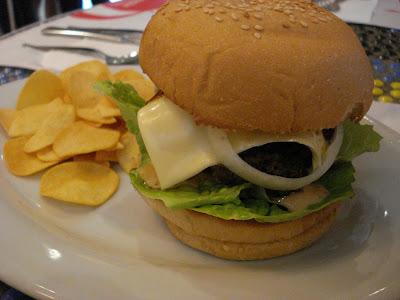 Paul chose the Migs Gallabergher (Php. 160). One point for the creative name unfortunately Paul found it lacking in flavor as the barbecue sauce was really overpowering and he could not taste any else other than that. The potato chips that accompanied the burger was pretty disappointing too. We were debating whether it was Piattos or another potato chip brand found in the supermarket.

Back to my Baked Creamy Cheezy Penne, I loved the mix of red and white sauce plus bits of Hungarian sausage that made this dish extra meaty. The serving size was very generous that I shared it with Paul and his siblings and there were still some left! What I didn't liked though was the pesto bread which could use more garlic and butter to have that much-needed zing.