February 01, 2012
I grew up in a very musically-inclined family. Aside from our shared love for food, cooking and eating, my relatives are also music lovers and its either one can sing, can play an instrument, or can at least appreciate good music.

A proof of this was during our wedding reception where not only one, not two but FIVE family members performed and there were actually still more who wanted to do a song number or two. It can truly be a concert when you put my entire family together.

Given that, my sister and I grew up watching musicals and listening to music that my parents would play on their cassette player. Imagine, the first movie that I watched was Sound of Music and I think I watched this over and over again until our Betamax tape gave up on me. My parents are fans of The Carpenters, Beegees, The Platters and ABBA so it's no surprise that my sister and I are very familiar with their songs... some we even memorize by heart. 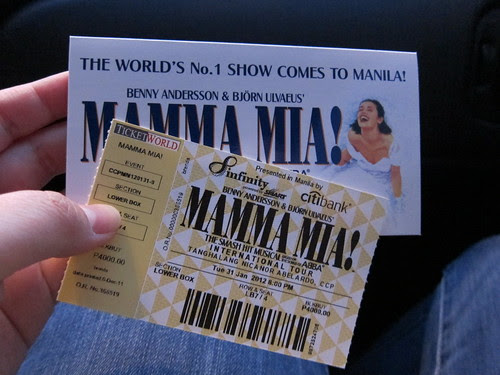 This is one reason why I was so excited when Mommy told us that she got tickets for us to watch Mamma Mia as it opened here in Manila last January 24, 2012! We've seen the movie and were told that the play is a lot better than that. Since I liked the movie already, my expectation was at an all-time high for the musical! This was even heightened with friends telling me how nice it was and I'd definitely end up having a week-long LSS (last song syndrome) after watching the show. 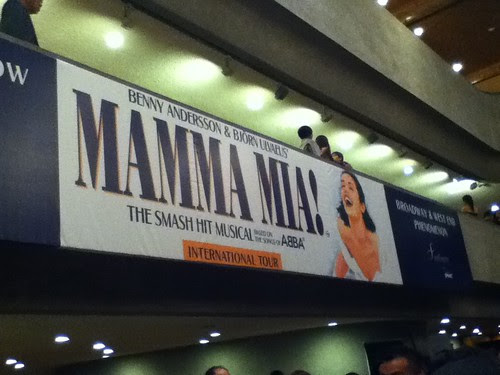 We got to the Cultural Center of the Philippines (CCP) two hours in advance to get a good parking spot and to have time for dinner. 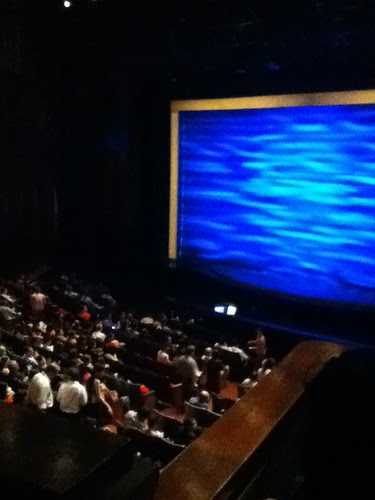 Mommy got us Lower Box tickets which I think gave us a really good view of the stage. The CCP Main Theater is a huge theater that can seat approximately 1,800 guests. It was my 3rd time to watch a musical at the CCP Main Theater after Miss Saigon and La Boheme.

At exactly 8PM, the curtains rolled up and for more than 2 hours we were greatly entertained by the very talented casts as they delivered their lines clearly and sang all the ABBA songs that we love.

Mamma Mia is a musical that evolves around a mother (Donna Sheridan) and daughter (Sophie)tandem in beautiful Greece and three men (Sam, Bill and Harry) who one can be the possible father of Sophie, the daughter who's about to get married soon. I love the story as its very light with a number of funny scenes here and there. The best part is that the songs perfectly fits the story.

Mamma Mia the movie vs. the musical?

While it was truly a delight watching Meryl Streep and Pierce Brosnan on screen, I must admit their singing prowess pales in comparison to their counterparts in the musical version. I was truly amazed at how the actress playing Donna Sheridan (Meryl Streep's character) can really belt out and clearly sing her lines making it heard all around the theater.

I've seen a number of musicals in the past but there's none that would make me clap, sing along and tap my feet every so often. The best part was the ending where almost everyone in the theater were up on their feet dancing to the tune of...you guessed it!...Dancing Queen! 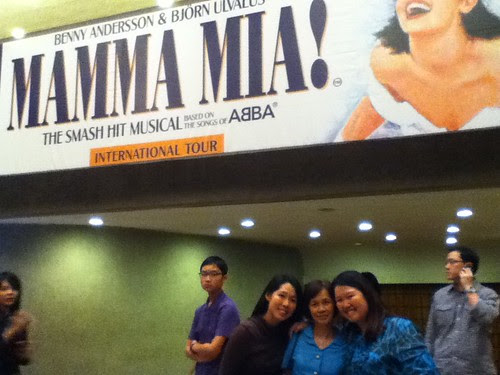 It was a great experience and I'm so happy and thankful that Mamma Mia came to Manila and I was able to watch it. I highly recommend this show and despite the expensive tickets, I feel that it's worth every single penny.

Haven't watched it yet? It's not too late! Mamma Mia will still be here till February 19, 2012. Click here for more info on the show and where to buy your tickets.

p.s. We were not allowed to bring in our cameras so I took these with my iPod Touch. Apologies for the grainy photo quality.
abba ccp international mamma mia musical play stage play sunlife financial theater ticket ticketworld