summer cravings: my one and only Mango Torte

- May 11, 2008
One afternoon, my sister brought home a big brown and orange square box that was given to her as a birthday gift. Dulcelin it reads. Filled with excitement and curiosity, I helped her open the box and saw a low (almost flat) "cake" filled with mango strips and pipings of whipped cream. Immediately, I thought it was someone's version of Red Ribbon's Mango Cream Pie -- a family favorite for years! 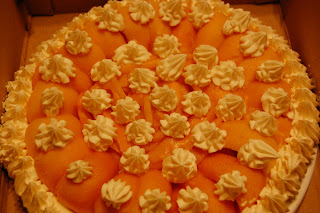 After dinner, we made tiny slices of the cake and saw that the mango strips lie on top of a thin layer of cashew nougatinne crust. Hmm...interesting. Taking my first bite, I love the sweet, silky taste of the mangoes against the nutty cashew crust. YUMMY!!

Unfortunately, I'm not a big fan of whipped cream that I had to carefully pluck out the cream from my slice of cake eating just half of what was served to me.

Later on, after doing my research, I found out that what we had wasn't a cake after all. It's called a torte which Wikipedia defines as

I also found out that Dulcelin is very much well known for its mango torte and they actually sold 2,000 pieces of these during the Holiday season back in 2005. I can just imagine how many Mango Tortes were sold last Christmas! *wow!*

Luckily, we also found out that a supplier is just located near our place making it easy for us to order a box of Mango Torte (9" P580/ 12" P850) whenever we have that sudden craving for it. It has also became a regular birthday gift that we would share with our friends and relatives and Dulcelin's Mango Torte never fails to bring out the excitement and curiosity in them as well.

This is one dessert that we'll never get tired off because of the just right feeling that it gives. The mangoes are of perfect sweetness and the cream just the perfect consistency. Not too heavy nor not too light.

It's my perfect summer craving together with a tall glass of icy water. Ü