After a week spent on food blogging, I think it's time to allow our poor, overworked but very satisfied tummies to "rest and re-charge" for a short while. Otherwise, I should probably make my own Little Loser character called Miss Glutonny inspired from the colorful shirts that Paul and I came face to face with when we attended the launch of the newest shirt line of David and Goliath yesterday. 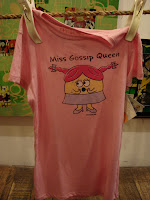 Staying true to the signature David and Goliath humor while injecting more ATTITUDE and SPUNK, creator Todd Goldman came up with the Little Losers collection. This is his newest set of designs featuring graphic misfits that pay tribute to character stereotypes. Looking at the available Little Loser characters (there are 21 out of 57 of them here in the Philippines!), Paul and I found our favorites. Mine was the Miss Spoiled Brat and his was Mr. Couch Potato. Definitely so US! Ü

The event was literally a FUN-filled one with the SPIT which stands of Silly People Improv Theater and Mr. NoyPi Gabe Mercado entertaining the crowd. Unfortunately, Paul and I were late and missed out on most of the comedic act but luckily we were still able to catch the awarding where awesome prizes were given out to the youngest and oldest blogger, the first blogger to arrive, who can say "David and Goliath" backwards and even to the one who was the first at the buffet line!

The highlight of the night, however, was that I was able to meet more bloggers again and share this fun fun fun event with Paul. A big hello to Rache, Phoebe and to my dear friend Sophie whom I haven't seen in AGES! 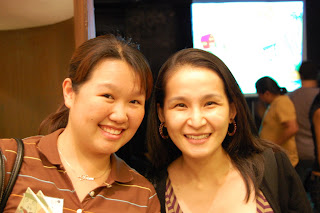 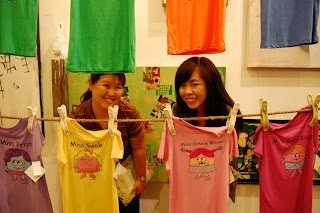 Yours Truly and Sophie
We ended the night by doing four pa-cute poses in front of the Fotoloco camera. Teehee Ü 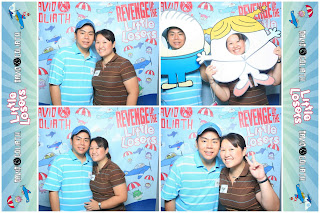 Big thanks to David and Goliath for a very successful launch and for showering us with cool giveaways!! We can't wait for the weekend to buy our own Miss Spoiled Brat and Mr. Couch Potato shirts!