- May 02, 2008
When I think of Greece...
... I see cute white square concrete houses lined up atop a hill
... I imagine symbols from my ancient history classes and the dream of visiting the Parthenon someday
... I drool over juicy lamp chops marinated in the most flavorful herbs and grilled to perfection
... I look forward to watching men and women shouting OPA! as they fire up a sizzling plate of melted cheese 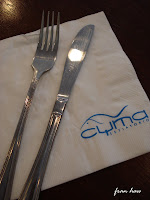 Greece is located in the southeastern part of Europe and consists of a mountainous mainland and numerous islands. Although this is situated at the opposite part of the world from the Philippines, we Filipinos are fortunate enough to be able to enjoy the food, tradition and culture of Greece when dining at CYMA.

During the Bloggers' Tour around Trinoma, we were able to meet Robby Goco, the Executive Chef of CYMA. Talk about being starstrucked! I finally had the chance to personally chat with the man who heads the powerful kitchen team who makes just the best Roka Salata, Saganaki (Flaming Cheese), and Lamb Chops in this part of town (or probably even in the country!)

He shared with us his secret (which we promise we will keep) and allowed us to sample a couple of their best-sellers which incidentally were some of my favorite dishes too! In true Cyma fashion, we were served with a platter filled with bite sized portions of: 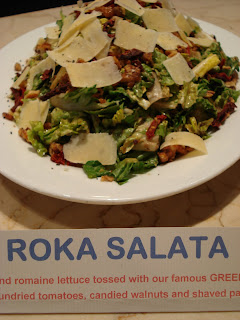 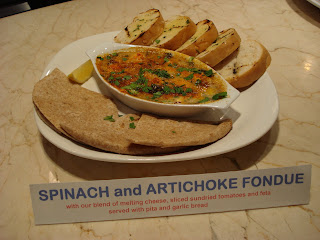 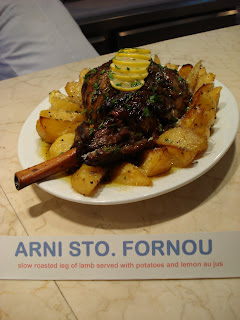 Arni Sto. Fornou
slow roasted leg of lamb served with potatoes and lemon au jus
note: this is a new addition to the menu, i think

and last but never the least (for chocoholics, this might even be the BEST!), Chef Robby treated us to his best selling dessert in the house the... 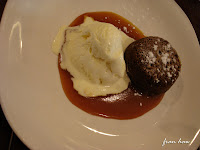 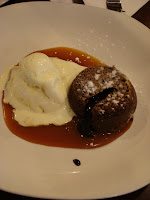 Skolatina (P210)
Inspired by the volcanos in Greece, Chef Robby created this sweet masterpiece which is a Molten Chocolate Cake served with a scoop of vanilla ice cream and roasted chestnut sauce. When served, one might think its just your regular mini chocolate cake but using your fork, make a slice and out will come the dark chocolate sauce that makes eating this dessert unforgettable. The sauce is still warm and it just blends perfectly with the vanilla ice cream.

What's great also with CYMA is the fact that the restaurant uses mostly local products and only the olive oil is imported from outside. It serves healthy, flavourful dishes that gives the Filipino dining market a chance to eat like a god or goddess without the guilt!