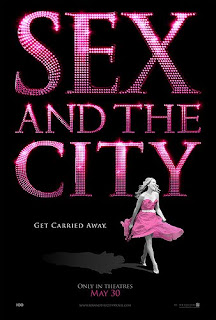 It began with a short recap on how the girls are -- Carrie, the ever fashionable New Yorker, has left Aleksandr Petrovsky and is now, once again, back in the arms of Mr. Big; Miranda, the intellectual lawyer has married her long time boyfriend, Steve and both are doting parents to Brady; pink-loving Charlotte has married Harry, her divorce lawyer, and after years of trying to have a baby has now adopted a cute chinese girl named Lily; finally, Samantha who has won the battle against cancer, moved to LA to be with her boyfriend Smith Jerrod who's an up-and-coming actor in Hollywood but flies back and forth to New York to meet up with the girls.

The movie later moved on to the newest developments in the lives of the girls. There's a wedding being planned, a baby on the way, a re-evaluation of a current relationship and an obstacle that will put trust and yes, love, to the test. Needless to say, it touches on every single aspect of a woman's life. Focusing more on the importance of having girl friends around when the world seems to crumble right front of you.

1) The time when Steve told Miranda he had a one night stand...
... and repeatedly defended himself by saying "it was just one time" over and over again. I felt my heart plummet all the way down to the ground as I can just imagine my own boyfriend or future husband giving me the same news (oh dear Lord..i hope this will never happen though). I saw the pain in Miranda's eyes and the feeling that she has just been betrayed by the most important man in her life. However, love is truly powerful that no matter how hard you fight to stay far away from him and how often you'd tell yourself to just forget him... i always believe that love will make you do crazy things...even to forgive and yes, forget.

2) The time when Carrie dragged herself out of bed just to be with Miranda on New Year's Day
The entire city went out to party while our two single girls stayed a home and immediately felt the loneliness without a loved one nearby. This scene showed the beauty of having a girl friend who will do anything for you. Thank God for girl friends. Ü 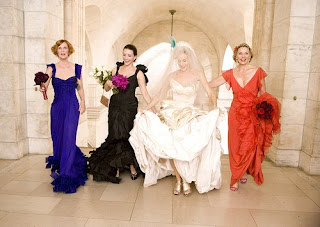 3) The time when Carrie's BIG day turned out to be a no-BIG day
I knew something bad is bound to happen when I saw the trailer scene where a mobile phone was dropped and the girls are rushing down the stairs with Carrie in her wedding gown. Right there at the middle of New York's busy avenue, Carrie met up with Big and began hitting him while screaming and crying at the same time. Mr. Big suddenly had cold feet and chose to back out from the wedding. This, I think is one thing that every girl would consider a nightmare. While watching this scene, I whispered into Paul's ear: "please do not ever do this to me..." with matching tears streaming down my face.

The movie ended with the four girls back at their favorite bar celebrating Samantha's 50th birthday. I love every teeny-tiny detail that was shown as it made us laugh and cry and laughed and cried some more. It made me thankful for having great girl friends who has been there for me through all these years :)
carrie charlotte miranda movie review samantha sex and the city