A very disappointing return at Italianni's

- June 29, 2008
Barely two weeks ago, I, together with a handful of bloggers were invited to Italianni's to learn about their newest campaign called Extra Surprises. I was so excited and impressed by it that I immediately wrote about to it spread the good news to everyone.

Today, I went out with my grandparents and have decided to treat them to dinner using the gift certificates that I have received from the event. My grandpa loves Italianni's and I figured out that it would be a perfect post-birthday treat for him. We ordered the Seafood Risotto, Chicken Marsala and the Pork Chop Au Poivre. 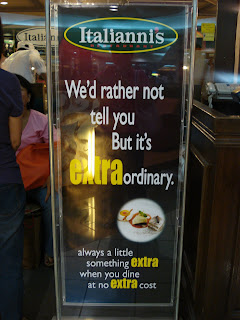 I was so excited to see the look on their faces when our extra dish would be served. Knowing that we ordered three main course dishes, I was kinda hoping that we'd either be treated to an extra appetizer or perhaps a cold salad or probably a sweet dessert to end our meal. I have also tipped our friendly server that it's my Grandpa's birthday knowing that they normally prepare something special for a birthday celebrant dining in their restaurant.

We have finished eating our orders, the plates have been cleared, the bill asked for and still no extra surprise dish. My sister and I were deciding whether I should ask them about it perhaps they just forgot or simply let it go and leave. We ended up with the first option where I called the attention of their supervisor and innocently asked her what the message on the posters displayed all over the restaurant was all about. She immediately told me that the extra dish is just for customers availing of the buffet. *TING! Strike One* I know for a fact that the extra dish is applicable to ALL tables regardless is they chose to avail of the buffet or go ala carte. After all their poster says

"Always a little something extra, when you dine at no extra cost"

Later, I guess she realized that I am not convinced with her answer and quickly excused herself to get some help. A couple more minutes later, another supervisor arrived and offered to help me. He told me that only the manager/manager on duty is capable of giving the extra dish and it just so happen that he was busy at the office that he missed out on our table. (Well, I'd give him a point for being honest...)

It wasn't until I casually told him that I was just wondering about the missing Extra dish after learning about it from a media event that he immediately asked me if there's anything that we want. *TING! Strike Two* I firmly believe that you do not ask your customer what they want but instead surprise them with something which YOU think they would like. Tsk tsk.. I wonder what would be his reaction if I tell him that we'd like our bill to be waived... hehehe

I was feeling very disappointed already and they only have one last chance to save this visit from being a part of my restaurant dining gone bad list. One thing good though was that our server remembered my tip off and together with the entire team, they surprised my grandpa with a slice of Chocolate Eruption together with a very very very sad rendition of the Happy Birthday song. It was totally a far cry from the impressive and heart-warming birthday song given by Rich of Italianni's Bonifacio High Street.

Eventhough, my grandparents showed their appreciation for the dinner treat tonight, I know that it could have been better.

I'm writing this entry not to give Italianni's a bad name. For the record, I personally love Italianni's and there's still a big chance that I'll go back again some time in the future. However, I might have to steer clear of this branch and perhaps just ignore whatever promotion or campaign that they may have to avoid feeling disappointed again. I just want to share this with everyone who might get all excited about this new promotion and also end up with nothing.

Lesson to be learned: Never promise something that you CAN'T deliver.
italianni's megamall warning