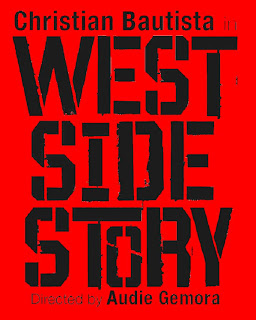 A new take on Shakespeare's classical Romeo and Juliet where it involves two neighborhood gangs that is always at war with one another and two hearts that continues to beat despite the rivalry and forces that keeps them apart.

It opened with a fight scene between the Jets (a group of white American boys) and the Sharks (a group of Puerto Rican immigrants) in West Side Manhattan. The story continues when Tony, a former Jets member, saw Maria, the sister of Bernardo who's the head of the Sharks, at a dance. They immediately fell in love despite knowing the possible consequences if ever they would get caught. The rumble between the Jets and the Sharks continues. Maria asked Tony to stop the fight which he promises to do. Unfortunately, the fight turned ugly leaving Riff and Bernardo, both gang heads, dead.

This was just the first part of the play. Though the story was pretty interesting, I somehow felt that something was missing. I've always been a fan of musicals but for some reason I found myself yawning halfway through the First Act and checking my watch every now and then. I looked around and I saw a number of people dozing off too. Hmm..looks like I'm not the only one bored.

In fairness to the casts, they were all good. Christian Bautista really showed that he can definitely do stage plays while Joanna Ampil was also a delight to watch. However, I guess there were just too many lull periods throughout the play. Parts where we, as the audience, would just watch and wait as to what will happen next. The music was wonderful too as it's by the talented Gerard Salonga and his orchestra.

I guess it's what you'd call the opening night jitters. The show where unforeseen and definitely unexpected incidents happen. For instance, the sound system was a bit distracting throughout the show. In fact, during the Second Act, we all heard a loud crash which could possibly come from a mic that fell off. The chemistry between Tony and Maria also seems to lack that kilig factor that the audience would inevitably look for. I always believe that an effective romantic scene would automatically make you go "awwwwwww". Last night, I somehow felt like I'm watching a couple doing major PDA on stage :(

The play has a very simple story line but as the curtain finally closes, we were all left thinking "That was it?"

Note that this is my personal take on the West Side Story production. Perhaps, tonight's and every succeeding show would be more entertaining. I would still encourage all of you to watch the famous love story of Tony and Maria.

Then again, maybe I am still enthralled with Avenue Q that it would take another great stage production to beat this. Ü
bits and pieces meralco theater play west side story