- February 18, 2010
Paul and I are such big fans of ribs! We enjoy the tender, falls-off-the-bone type that was perfectly marinaded in yummy barbeque sauce and grilled to perfection.

Sure we have tried a number of rib dishes here and there but we are still in the look-out for that perfect ribs platter that will make us lick our fingers clean and leave our stomachs happy.

I've been looking forward to this year's Valentine's Day simply because Paul told me he got something planned already. You see, for probably 350 days in the year, Paul will just leave me to choose which restaurant to dine in and to plan our entire day's itinerary. For the remaining 15 days though, which includes Valentine's Day, my birthday and our monthsaries and anniversaries, then he would take charge in doing so.

He told me that we will have a fun romantic dinner in Makati and left it at that. The suspense was killing me as I was dying to find out where exactly our Valentine's dinner would be. Despite constant prodding, he kept mum saying that it will be a surprise.

So I agreed and come February 13, the night before Valentine's Day, we drove all the way to Makati. Upon reaching the Ayala - Makati Ave intersection, he made a left and was heading towards the Ayala Center. My mind went blank, there are more than a hundred food establishments in there! I just let him drove, went in the Glorietta 4 parking and held his hand as we walked up to the Ground Floor.

Then he stopped and I let out a squeal. We are dining at Tony Roma's and boy was I excited!

Just a little backgrounder, we have been planning to dine at Tony Roma's since we started dating 7 years ago but since we rarely frequent the Makati area, this plan has been pushed back and further back ever since. Finally, our plan will pushed through and here we are walking up to the 2nd floor of the restaurant.

Paul made reservations and our server led us to a nice table by the window. The ambiance was very romantic despite having a couple of tables with big families enjoying their meal.

We scanned the menu and agreed to get an appetizer and two main dishes. We have been craving for ribs and since one rib platter was not enough to satisfy our craving, we ended up getting two! 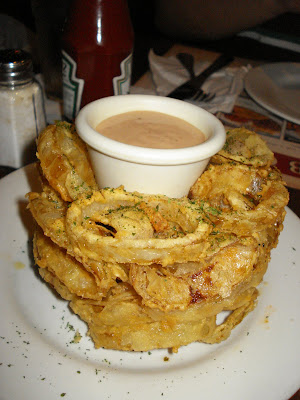 Service was very efficient and quick, while Paul was busy playing with his new camera accessory, our Onion Loaf (Php. 295 - half) arrived shortly. It's funny that we both love onion rings and fries! Paul enjoys tearing up the crunchy onion rings with his hands while I gently try to pick each piece up with my fork. He loves to cover the rings with tomato ketchup while I love dipping it into the tangy-sweet BBQ-Mayo sauce that came with it. I highly recommend this appetizer as it will surely be enjoyed by everyone on the table! 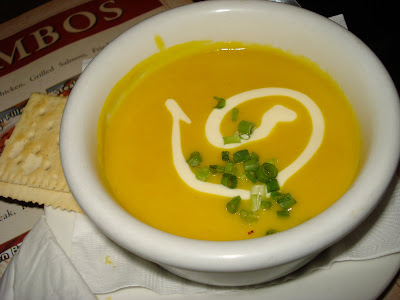 While enjoying our appetizer, our soup came next. This was actually part of the rib platter that we got. The soup of the day was Cream of Pumpkin. I still prefer Cibo's version which for me was the most delicious pumpkin soup that I've ever had so far. Tony Roma's version was a bit watered down and lacks flavor and character.

Then the stars of the show... Paul got the BBQ Chicken and Rib combo (Php. 875) that came with a generous serving of fries and coleslaw. We shared on the BBQ Chicken Leg and I love how juicy and smokey it was. So yummy! No need to add sauce as it was perfectly marinaded and definitely well-done. We alternated between the ribs and the chicken. We were in meaty heaven. 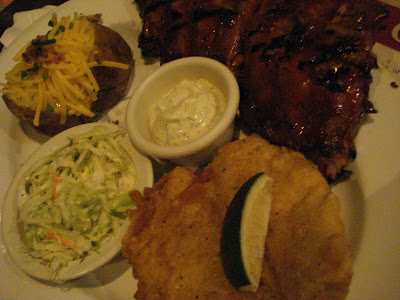 Meanwhile, I got the Fish Fillet with Half-slab of Ribs combo (Php. 895). Unlike Paul's platter which gave a stellar performance, my fish fillet had to be sent back to the kitchen for another round at the deep-fryer.

On our first bite, we both felt like the fish meat was not as tender as we were expecting it to be. Also, it somehow tasted like soil -- a sign that the fish was not that fresh anymore. Calling the General Manager's attention, he sent the fish back to the kitchen and came back a couple of minutes after with a new one.

My platter came with baked potato and tartar sauce that I love so much. The coleslaw was also yummy but what really made my evening was the half slab of tender, juicy ribs. The meat was soft and you can easily pull it away from the bone with just a slight nudge using your fork. The sauce gave a smokey, barbecue flavor that we both enjoyed so much.

We were so full after finishing off our platters that there was no space left for dessert. As expected, our last Valentine's dinner as boyfriend and girlfriend ended with a BANG! :)
Thank you Paul for the lovely, yummy dinner! *hugz* Looking forward to a million more romantic dinners to come!

Tony Roma's Restaurant is located at the Ground Floor of Glorietta 4, Ayala Center, Makati City. Call them at 757-1926.

p.s. my apologies for the poor photo quality... i think it's about time to buy a new camera :)
p.p.s. Red Letter Day stands for any day with special significance. For us, it is during Valentine's Day, our anniversary and soon our BIG day wherein we are thankful for having each other.
ayala malls bbq grill chicken cream dory date fish fillet food glorietta grilled chicken love makati onion loaf onion rings pork spare ribs ribs tony roma's valentine's day