- October 31, 2010
Pasalubong is the Tagalog term for presents given by someone who just came home from a trip. A pasalubong is normally a native product from a province or a keepsake from the visited destination. 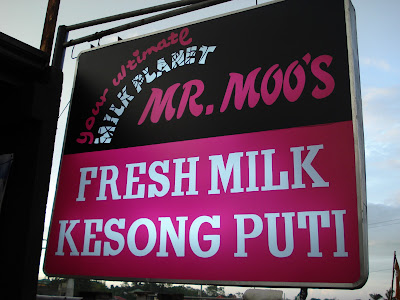 Before leaving Tagaytay City, popular pasalubongs would include Buko Pie, Pineapple, Guyabano, Espasol and Langka. On our drive home during our recent visit to Tagaytay, we chanced upon a brighly lit pink signage that says Kesong Puti and Fresh Milk for sale. We have heard raves about Mr Moo's Carabao Fresh Milk and Paul was determined to give this a try.

Visiting the store, we found out that they are selling more than Carabao Fresh Milk. In fact, they have a huge blackboard filled with their items such as Pastillas de Leche (Milk Candy), Feta Cheese, Yogurt, Cottage Cheese and even Goat's Soap! Making it an interesting pasalubong stop.

We ordered two bottles of Carabao Choco Milk (P36 / 200ML) to share with my sister. Since the ride home will take us a little more than an hour, the lady offered to pack in some ice cubes to keep our milk bottles cold. 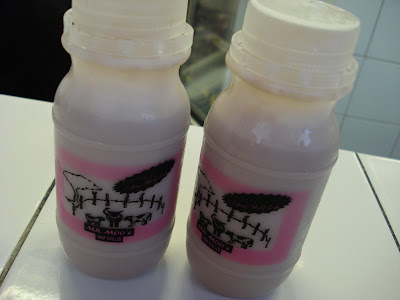 We opened our bottles of milk the moment we arrived home and poured the contents into our glasses. I noticed that the brown looks a bit pale compared to the cold chocolate milk that we're all used to. Taking a sip, the taste was pretty much the same.

Paul enjoyed the fresh chocolate milk and noted that it's richer than the average fresh milk as he believes that it has a higher butterfat content. Thus, do drink with caution for those who are guarding their weight.

My sister, the Carabao milk newbie, was surprised that the milk tastes pretty good. She was a bit hesitant but her adventurous taste buds just pushed her to give it a try. She feels though that it's best to chill this as the milk tastes better when cold.

Also try their Pastillas de Leche (Php. 72), using fresh carabao milk to produce, it has a very milky texture and the pastillas literally melts in your mouth! Yum!