August 27, 2011
Looks like we, Filipinos, will be able to travel more often come 4th quarter of this year as we welcomed AirAsia Philippines that flew all the way from Toulouse, France and landed at the Diosdado Macapagal Airport in Clark, Pampanga last August 15. I shall step aside and let Paul tell you about his experience as he was able to witness the arrival of the new low-cost carrier that will definitely add more excitement to the travel industry.

It's pretty obvious that Fran and I love to travel. In fact, we have been slowing down with our travel plans lately after a back-to-back vacation to the United States and to Taipei, Taiwan early this year. Traveling, despite how fun and enriching it may be, can really hurt your pocket if it wasn't planned and scheduled properly.

Thankfully, as travelers, we get to have more options nowadays to travel within a budget. There are a lot of low-cost carriers that can fly domestic and international at a very cheap rate. Of course, you just have to discount the fact that no meals will be served and luggage weight limit is significantly lower as oppose to flying with major airlines. I, for one, don't mind since going to Hong Kong would only take us a little more than an hour so I would just save my appetite for the numerous food items that I can indulge in the moment I touchdown at the Chek Lap Kok Airport. 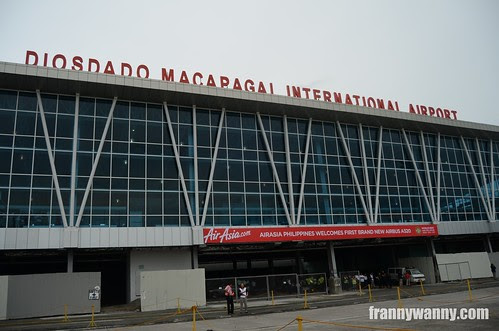 I joined the shuttle bus that took a couple of bloggers and media crew to Clark, Pampanga. It's funny that despite being a cabalen, myself, I've never been inside Diosdado Macapagal Airport as almost everyone flies out from the Ninoy Aquino International Airport in Manila. Personally, I like the airport as it's clean and of course, has less foot traffic. Definitely less chaotic and since it's small, you can immediately check in and head to the boarding area in no 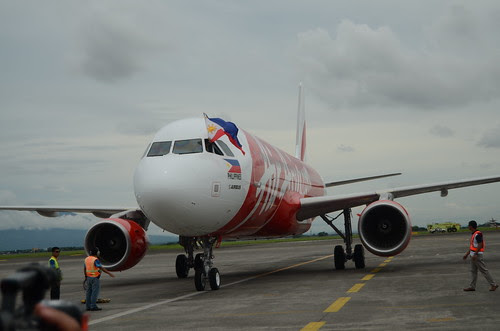 We waited for a while and at exactly 11AM the new AirAsia Philippines landed and was given a water cannon salute which was a tradition done to new airplanes. This is the first of 4 AirAsia Philippines planes that will be sent to our country, the 2nd will arrive later this year and the last two to be delivered by 2012. 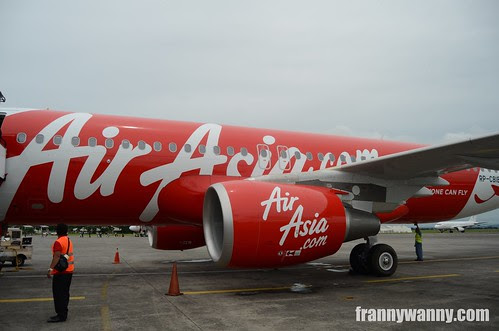 Fran and I were able to try AirAsia last year as we flew to Malaysia from Singapore. I remembered that we both enjoyed the flight and were pretty please with the size of the legroom and seats despite it being a low-cost airline. Fran even wanted to order some Beef Rendang to try but the flight just took exactly an hour not allowing passengers to fully enjoy a hot meal. 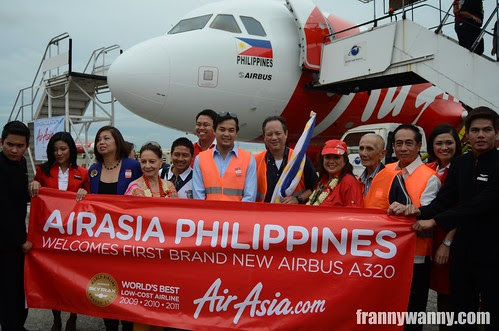 AirAsia Philippines is headed by CEO Marianne Hontiveros and co-owned by Antonio Cojuanco Jr. and Michael Romero. During the launch, I also saw Department of Tourism Secretary Alberto Lim and a lot more local and foreign dignitaries. It was definitely a joyous celebration as we welcome yet another airline that will take us around the world under a reasonable budget. 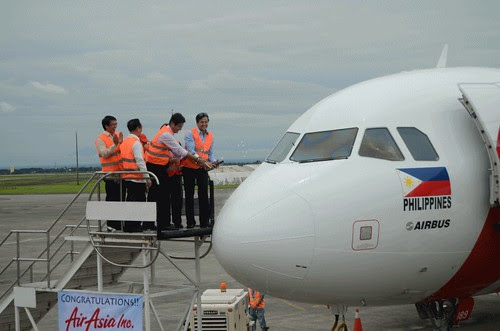 Aside from the traditional water cannon salute, we also witness the wine pouring which was done by Sec. Alberto Lim, AirAsia Philippines owner Michael Romero and company.

I'm glad to be part of this group that witness such event as I didn't know that were were actually some welcome rituals done when a new airline gets delivered to our country.

I'm sure my wife can't wait to travel again. I was told that AirAsia Philippines is just awaiting the official approval to start flying commercially and this year they plan to take the local market to Singapore, Macau and Hong Kong. After which, they will target Bangkok in Thailand, Incheon in South Korea, Kalibo in Aklan and Puerto Princesa in Palawan.

AirAsia Philippines will be using the Diosdado Macapagal Airport. I just hope that they will also have a number of shuttle services that will take passengers to and from Manila to Clark and back.

Fun facts that you should know:
- AirAsia Philippines is the newest member of the AirAsia family which includes AirAsia Berhad (also known as AirAsia Malaysia), AirAsia Thailand and AirAsia Indonesia.
- Aside from the Philippines, AirAsia plans to expand also to Vietnam.
- Recently, they have launched AirAsia X which is a low-cost long-haul affliate that flies to Australia, New Zealand, China, Taiwan, India, UK and France to name a few. Imagine, we can soon fly to Europe at a very cheap price!
- Flying from Diosdado Macapagal Airport, AirAsia Philippines aims to cater to travelers from the Northern part of Luzon.