September 11, 2013
11 July 2013 -- Exactly two months ago today, Paul and I celebrated our 3rd wedding anniversary. We both can't believe how time has flew by so fast! It really just felt like yesterday when we were still busy planning for our BIG day. We can still remember every single detail and moment of that wonderful day. 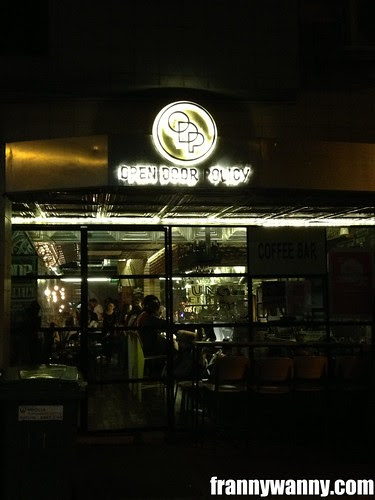 For the past two years, Paul and I would go on a weekend staycation to celebrate our anniversary. This year, we decided to do it differently. Since we're in a new place and there are hundreds (maybe even thousands) of restaurants out there, we agreed to meet up for dinner in one of the highly recommended restaurants along the famous Yong Siak street in Tiong Bahru. Our choice for that evening was Open Door Policy (ODP). 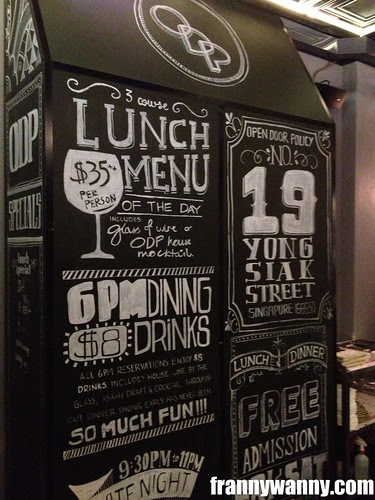 Days leading up to our anniversary, we were told by our friend I to make a reservation because the place easily gets filled up. I wasted no time in doing so as ODP luckily has an online reservation system which I find so efficient! How I wish restaurants in Manila would do the same.

From the Tiong Bahru MRT station, Yong Siak street is about 3-4 blocks away. Do make sure to allot about 15-20 minutes of walking time to get there. Thanks to Paul's amazing navigation skills, we got to ODP in no time. 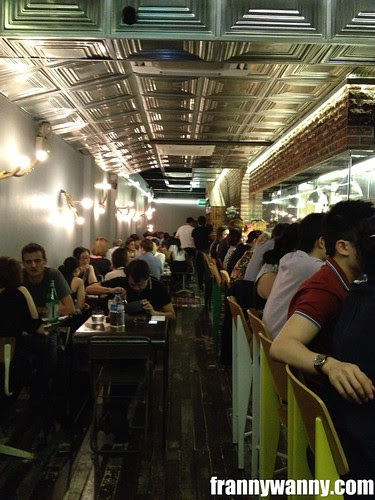 The restaurant is quite small and it had a somewhat dark ambiance similar to a bar. We were quickly led to our table which was right beside a long one currently occupied by a big group. It's a good thing we got the corner spot else it would have been quite claustrophobic if we were sandwiched in between two groups. 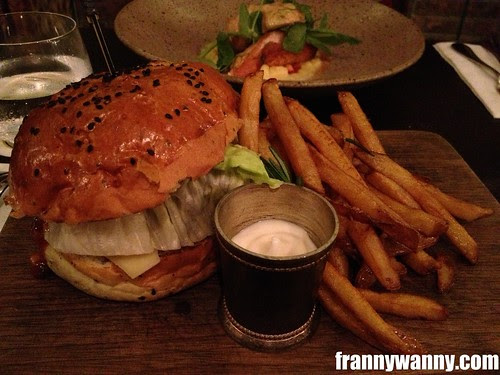 The menu was pretty simple but it was so hard to choose as everything sounded so good! Finally, I closed my eyes and just went with whatever my finger pointed. After a brief eenie-mini-miney-moe, I went for the ODP Burger (S$27) which is said to have all the trimmings, garlic fries and Japanese mayonnaise. Definitely not for those who are on a diet but hey, it was our anniversary and so we were ready to feast! The burger was huge! When it was placed on our table, I overheard the two guys beside us admiring it. I requested that my burger be grilled medium well and I'm happy that they did just that. As for the trimmings, I was really expecting a leveled up version of your average burger but it had the same lettuce-tomatoes-cucumber ensemble you get elsewhere. Wish they have added in caramelized onions, cheese, bacon or any exciting ingredient out there.

As for the fries, it was a bit soggy and too oily to be enjoyed. I just had a few and just concentrated on my burger. This is rare as I normally love fries but I just do not like soggy fries *blech*. 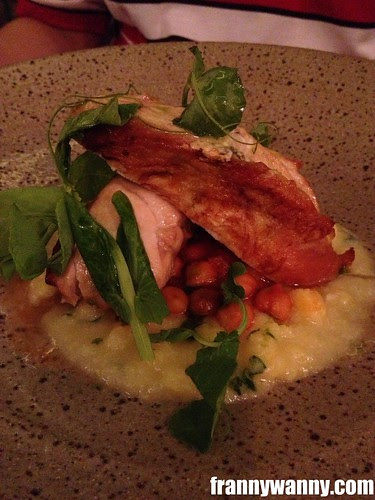 Paul, on the other hand, got the Roast Chicken with Chickpea Cassoulet and Wet Polenta (S$26). At first glance, I got to admit that I thought the chicken was dry. This is one reason why I stay away from Roast Chicken Breast as the ones I had before were really disappointing. That wasn't the case in Open Door Policy as Paul happily polished his plate and after which declared that it was one of the yummiest roast chicken dish that he has had...ever. I wasn't able to try the chicken but the polenta was pretty tasty. Thumbs up to ODP for the impressive chicken dish. To go with our meal, we also got a basket or rather a stack of french bread. I'm surprised that serving bread with butter or the yummy olive oil-vinaigrette combination was not the norm. They simply just have the bread alone. I'm glad that our Pinay server knew that I wouldn't be satisfied with just bread and so she came back to our table with a plate of dip and a saucer of cheese too!

I got to admit that the price was a bit steep considering that the serving size was just good for one and the food taste was pretty ordinary. At some point, we felt that it was over-rated. Don't get me wrong, the food wasn't horrible but I guess our orders were just quite boring. Over-all, serving was superb and I will most likely go back to ODP to try their brunch selection next time.