September 06, 2013
Months ago, photos of this donut-like pastry has been popping up on my Facebook wall and Instagram feed. One post after the other from various friends would show their latest discovery and I have been dying to give this a try.

CRONUTS. That's what they're called. A perfect play between the mouthwatering words "croissant" + "donuts" I later found out. Did a little research about it and learned that these sweet creations originated in New York, USA. Trust my fellow Filipinos to catch this food craze right away and so within weeks more and more bakeries and retail shops began offering their own versions of Cronuts.

Before heading home last weekend, I messaged a couple of foodie friends to point me to where I should try my first cronut. They were very helpful in giving me tips and so I went home ready for my Cronut initiation. 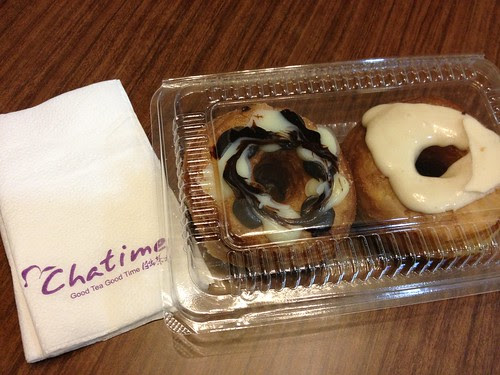 First stop was at Chatime in Pioneer, Mandaluyong City. When a friend told me about this, I immediately asked if she's sure about it as Chatime specializes in milk tea. Truth to be told, I can't really imagine having this French pastry with Milk Tea. Sounds a bit weird but she was pretty sure about it and so I placed Chatime as part of my "Cronut tasting" agenda.

It was perfect timing that Paul and I did some some grocery shopping in Pioneer Center and Chatime was just right beside it. While Paul was in line for the cashier, I asked him if I could quickly hop over to Chatime to check the much-talked about Cronuts (or Kronuts as Chatime spells it) out.

As I entered the store, I immediately spotted the glass casing that houses these babies. Each piece is priced at Php. 55 which I think was just alright given that they're a bit more premium than a regular donut or a piece of croissant. There were 5 flavors available: White Chocolate, Cream Cheese, Strawberry, Dark Chocolate and Combination.

Since I was flying out the next day, I decided to get two for a really quick Cronut/Kronut tasting. It was hard for me to choose which flavors to go for but eventually I chose the Cream Cheese and Combination variant. 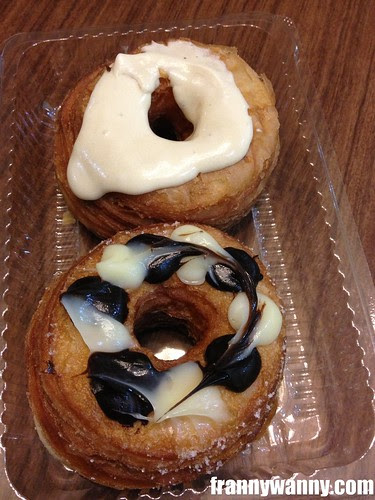 I was so excited to give this a try and I had to wait after dinner to finally try them out. I tried the cream cheese first and I got to admit that I could hardly taste the cream cheese. The flavor was a bit weak that it just tasted like a very light vanilla topping. The cronut stayed soft and chewy though. Next was the Combination. This one was better as I liked the strong chocolate-y flavor.

Over-all, I got to admit that I'm not a big fan. I know Cronuts are deep-fried and I somehow find it hard to consume the whole piece as I could feel the oiliness in every bite. Sorry Chatime but it sadly wasn't love at first bite. I'll stay loyal to your milk teas though.

Nonetheless, I'm not giving up. I'll be back and will try other cronut versions available out there. Send in your recommendations below! I'll take note of it on my next visit home.