September 18, 2013
Having been to Malaysia only once wherein we decided to spend a week in Kuala Lumpur for the second leg of our Honeymoon, I have to admit that I know very little of the other states around the country and this includes Penang. If there's one thing that I know about this northern state though is that the food here is the best in entire for Malaysia and for that I still regret not taking the chance to visit Penang then. I'm not worried though as Penang is a short one hour flight from Singapore which means Paul and I can fly there for a quick weekend food trip anytime we want. Right?

It also helps that my colleague K is from Penang and by just listening to her stories, I am convinced that Penang is such a lovely place worth visiting. After all, who wouldn't want to visit Georgetown which has been proclaimed at a UNESCO World Heritage Site? Well, I surely do!

Call it fate that Paul and I were invited by our friends over at Traders Hotel for a preview of the ongoing Penang Festival at CafeBiz. This is just the best way to give us a gastronomical glimpse of all the yummy dishes that awaits us in Penang. It's interesting to note that Malaysia, Singapore and even the Philippines share a lot of similarities when it comes to our cuisines. I guess this goes the same for the rest of the Southeast Asian countries where the use of coconut milk and spices (think curry, star anise, chili etc) is evident in most dishes.

Here are some of the dishes that you'll be able to enjoy from 13 September to 31 October at Trader's Hotel: 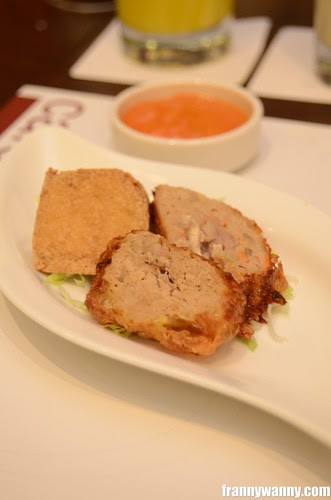 Loh Bak and Tau Kwa Sumbat
Looks familiar right? Yes, it's no other than our favourite Ngoh Hiong / Kikiam. It tastes exactly the same as our well-loved street snack. This was served side by side with the Tau Kwa Sumbat which is stuffed tofu traditionally served with a spicy chili sauce. However, Chefs Lim Thow Shong and Ridzuan Bin Mat turned it into a sweet peanuty red sauce that has added more life to the usual deep-fried tofu. Thumbs up for the creativity and definitely a great start to our Penang feast. 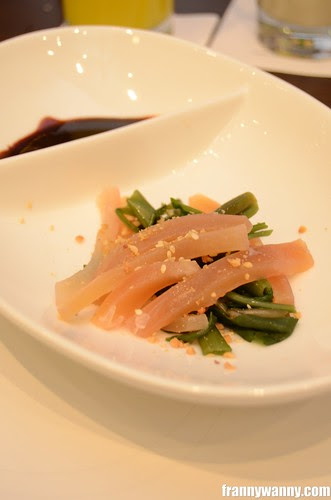 Cuttlefish Salad
I have to admit that the next dish was the only one that I wasn't so crazy about. The veggies were crisp and fresh but definitely very bland that you have to dip this into the sweet hoisin sauce served with it. The cuttlefish had a jelly-like bite into it that I'm not very fond of. Okay, next! 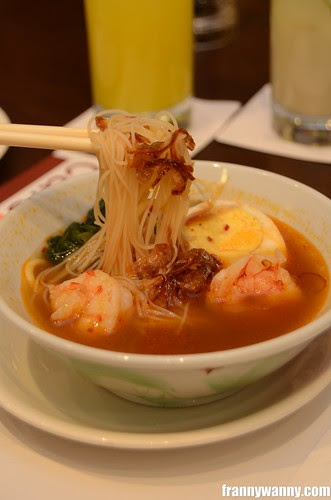 Hokkien Prawn Mee
I've always been a fan of Singapore's Hokkien Prawn Mee and if you ask me, this is one of the things a visitor shouldn't miss out on. As for Penang's Hokkien Prawn Mee, oh boy, this one is another winner! I just love everything about it. The al dente glass noodles, the juicy prawns, the egg, the delicious broth that I can't get over with. It was so good! Since I can't fly to Penang just yet, I'll make sure to go back to Traders Hotel for more Hokkien Prawn Mee for the time being. 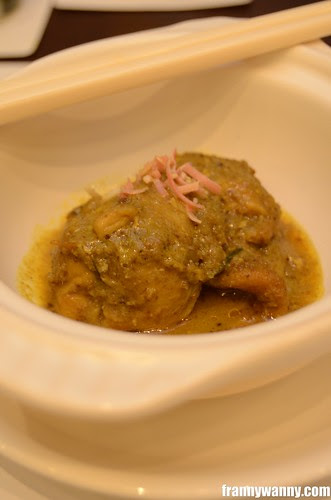 Chicken Curry Kapitan
From one delicious dish to another, I was still swooning over the Hokkien Prawn Mee and another claypot dish was served in front of me. This time it looked our my mom's Chicken Curry and it surely is as fragrant too. Normally, I'd proceed with caution as local curry can be really spicy but this one had a rather sweet creamy note that would go so well with rice. I love how the coconut milk (gata) has made this a really creamy and comforting dish. Yummy! 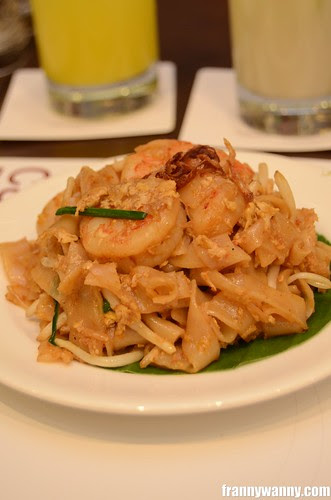 Penang Char Kway Teow
Remember, I mentioned that if there's one thing I know about Penang then it would be about it's culinary expertise. This is one of the dishes that I was told Penang is really proud of. To the world perhaps, Singapore's Char Kway Teow surely has made it to the popularity board but for serious foodies in the region, a good number has chosen Penang's version instead. Let me tell you why, I find the Penang Char Kway Teow to be more on the savory side while Singapore's version is sweeter. It's lighter in consistency too perhaps because they skipped the sticky soy sauce that's used in this side of the region. Furthermore, it's simpler. Less eggs used and more veggies and prawns. If you want a more savory, no-frills Kway Teow then you shouldn't miss this. 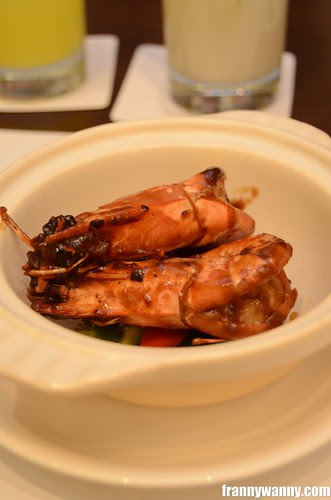 Assam Prawns
I got to admit that for the longest time, I've been avoiding all the local Malaysian and Indonesian dishes simply because I have a feeling they'd all be really spicy. Take for example the Assam Prawns, seeing the bright red sauce, I immediately deduce that it is a spicy dish and has been ignoring this for months since I got here. Well, after having my first taste of it, I honestly felt silly as it wasn't spicy at all. Assam is similar to our Filipino word asim which means sour. As it turns out, Assam Prawns is cooked with tamarind, salt and sugar and has no chili included in the recipe. It was delicious too and this will definitely be one of my top choices when visiting a Malaysian stall from now on. 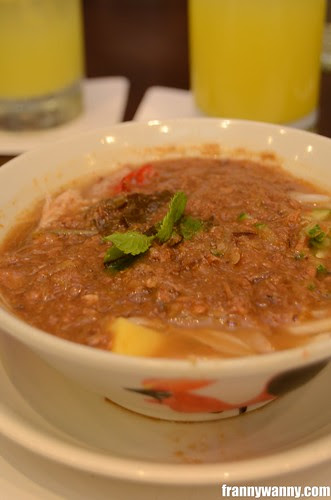 Assam Laksa
The same went for the Laksa, since it was cooked with tamarind, it had a strong sour flavour mixed with a kick of saltiness brought about by the fish included in this noodle soup. Sadly, I'm not a fan of Laksa most especially after falling deeply in love with the Hokkien Prawn Mee. If you enjoy the marriage of hot and sour flavours, then you'll most probably love this. 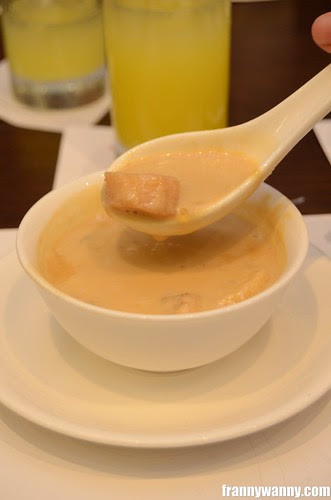 Pisang Pengat
I was ready to raise the white flag at this point as we were literally bursting with so much food! However, there's no way we're not ending our meal without dessert. Here's another traditional Penang treat -- the Pisang (Banana) Pengat. Made of rich coconut milk, sago, banana and gula melaka, it reminds me of the Filipino Guinataan, a snack/dessert that we miss sooooo much! This was so good that we actually were contemplating of asking for seconds. 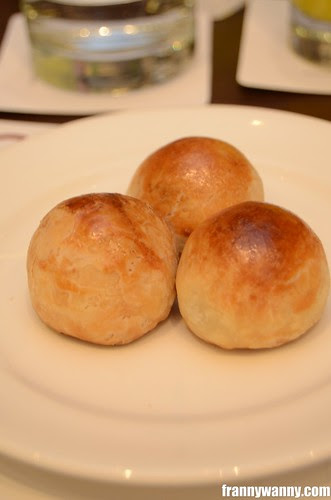 Tau Sar Piah
Lastly, we had an exclusive Penang snack that was specially flown in for us to try. This is the Tau Sar Piah, a baked pastry filled with mung beans. Sounds familiar, fellow Filipino readers? Of course! It's our Hopia Baboy made into a ball and baked to perfection. This one came from a popular bakery in Penang which I'll make sure to visit when I'm there. I'm hoarding boxes and boxes of these delicious treats!

There you go! Indulge in a gastronomic feast of delicious Penang over at Traders Hotel Singapore anytime from September 13 until October 31, 2013. Who knows?! You might just win yourself a complimentary two-night stay in any of the three Shangri-la hotels in Penang, Malaysia! Time to Makan!