- October 13, 2014
My hubby Paul is such a foodie. Yes, a genuinely, certified foodie. This is definitely one reason why we believe we're a match made in (foodie) heaven. In fact, I'm starting to believe that he's a biggest food lover than I am. For one, he just loves watching cooking shows on YouTube and on TV and would remember every single detail of the dishes being demonstrated. If he likes it so much, he'd even try cooking it making me his happy food taster. I guess this is his Campampangan side showing. 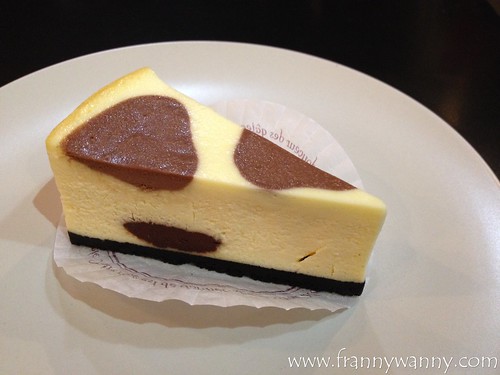 During one of our weekend shopping trips to Takashimaya Department Store where we ended up walking around the basement level, he instantly stopped at one of those kiosks selling cheesecakes. I initially thought nothing of it until it seemed like there was no sign of him leaving that kiosk anytime soon. He excitedly told me that he knows about that cheesecake as he saw it on TV and quickly went to buy a slice. Woah! Normally, it was me who would go and immediately splurge on food while it would take him a couple of minutes to decide especially if it's on the pricey side. This just got to be a special slice of cheesecake for him to act on impulse.

I know Paul loves sweets but it's rare to see him so excited over...a cheesecake. I later found out that this is no ordinary cheesecake. It's called the Cow Cheesecake (S$6.70) from Farm Designs and what makes it so special is that it's made of Jersey milk from Hokkaido, Japan. It's rich in butterfat making it so creamy. This milk was taken directly from the cows of Farm Designs which I was told was of top quality. 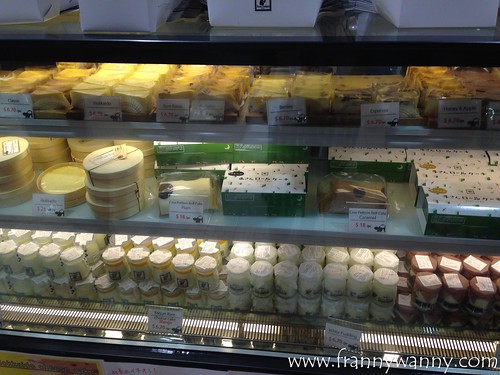 Paul told me that he saw this being featured in this TV show called Destination Flavour Japan where the host, Adam Liaw interviewed Farm Designs' Mrs. Megumi Kaino who demonstrated how to make this mouthwatering cheesecake. In Paul's words, the cheesecake looked so good that he could feel his mouth water while watching it on TV. No wonder he was so excited to see it here in Singapore. Farm Designs also sell milk pudding and different flavored cheesecakes too.

The real test came after dinner where we shared a slice of cheesecake for dessert. I love how cheesy and creamy the cake was. I love cheesecake and this just got to be one of the best that I've ever had in my life. The crust had a buttery, cookie-like texture and the cake itself was dense, silky and oh-so-yummy!

Sadly, Farm Designs was just part of the 10 day Hokkaido Food Festival which ended yesterday. Boo! Wish they'd finally open a store here in Singapore soon. Nonetheless, I'm so glad that Paul found this and we were able to try this amazing cheesecake.

Farm Designs was part of the Hokkaido Food Festival at the B2 level of Takashimaya Department Store, Singapore.