- October 04, 2014
It's no secret that both Paul and I have been bitten by the travel bug. While our traveling has very much toned down since we moved to the Lion City, I'm just glad that we somehow would still sneak in a short trip here and there when given the opportunity. I guess we have been traveling so often that we have mastered the art of packing and unpacking in the faster way possible. Of course, it has also been established that I am no light packer so whatever happens, I really have to bring my trusty hand carry luggage with me. At least, that gives me 7kg allowance to pack all my clothes for the weekend no to mention my laptop, chargers and a book to read on board. 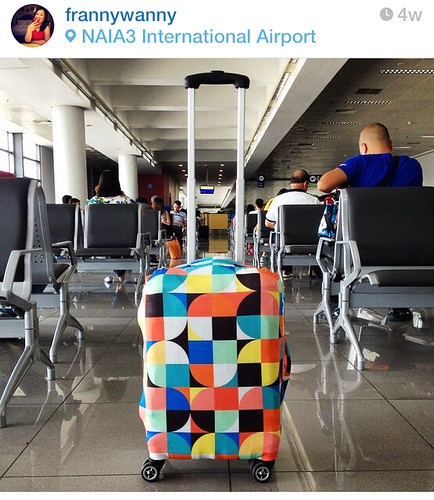 For the longest time, only I have a carry-on luggage while Paul would pack all his extra clothes, camera and on board items in a backpack. It was only recently that we finally got a second hand carry luggage. It's a black hard case cabin-sized luggage that's pretty lightweight yet sturdy enough to withstand the rain and being tossed around while in transit. Since the material is quite durable, we can also check it in too. Now, after getting the bag and admiring it for quite a while, we suddenly realized one thing. The color is so common that it easily blends into the sea of black luggages wherever we go. Then we discovered Conservo -- a local brand selling really cute luggage covers! 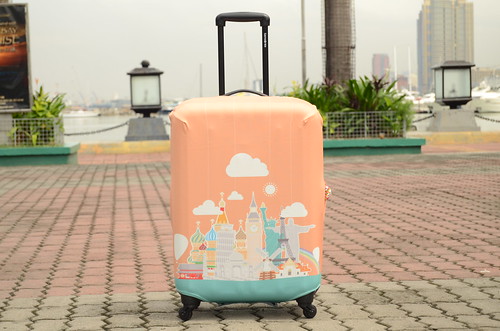 I've heard a number of horror stories of luggages being taken by mistaken or missing ones wherein the tag fell off so it couldn't be identified and more. I just hate the idea of having to go through the hassle of trying to describe your luggage in vain but still to no avail. Imagine, how can we say "it's a small black hard case luggage". For sure, hundreds of other luggages would fit that exact same description, right? What I like about Conservo is that the designs are so cute! I was so thrilled when the cool folks behind Conservo told me that they're giving me one and it took me quite a while to finally make a decision on which design to get. I wasn't quite sure if I wanted to go all funky with the colorful cartoon designs or classy with the black and white ones. Eventually, we made a half-way deal -- a colorful design with a nice circle pattern. Now, that made our luggage looks mature but not boring at all. 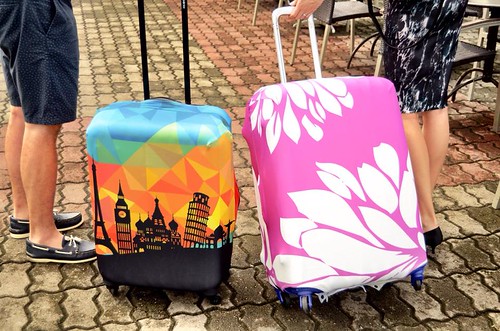 Aside from making sure that we can spot our luggage from afar, there's also that thing of wanting to stand out. Having our luggage cover gave our hand-carry luggage a new and better personality. The good part is, Conservo actually has luggage covers in three sizes: small (Php. 750), medium (Php. 850) and large (Php. 950). It has a good snug fit to our black hard case luggage making it look so sleek and classy as we pulled it around the airport. The material is washing machine friendly so we can just toss it in to clean after a trip. 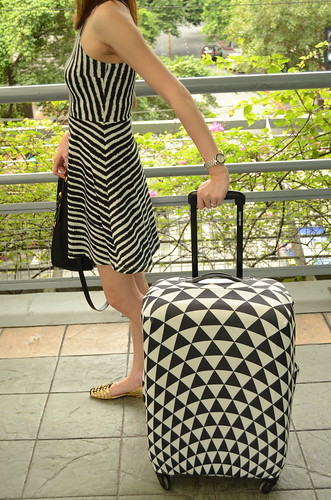 Since Paul and I just love buying and collecting luggages (we have 8 and counting!), looks like we will be doing more luggage cover shopping pretty soon!

*photos by Paul Ang for Conservo