- December 20, 2009
Last November 24, I received an email from Mr. Ritche Salgado who introduced himself as a writer for The Freeman. Upon reading the first two sentences of his email, I was baffled as to why on earth would he write to me. 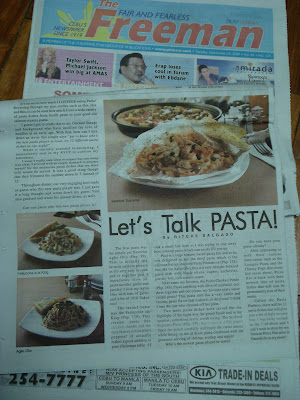 Reading further on, I then found out that it was an apology email as apparently he accidentally submitted my entry about Pizza Hut's newest pasta line and it was published under his by line. It took me a while to absorb the information that I have just gathered from his lengthy email. He kept on apologizing but of course I just had to see this for myself. Apparently, every article written on The Freeman also gets published online via PhilStar.com so my article was re-published not once but twice and it was under someone else's name.

Perhaps the normal reaction here is to get mad, to threaten to sue or at least to complain directly to management. My colleagues have been helpful by offering to give me the contact details of the publisher and to support my every move. A lot were angry and some were disturbed that if this can happen to me, then it is also highly possible that their articles/entries are also being used without their consent somewhere out there.

Well, how did I deal with this?

First of all, I did not get mad at Mr. Salgado. No harsh words were written, no mean feelings were given. I just couldn't find it in my heart to get mad after seeing that he has came forward and apologized for what happened. Somehow I believe that there are still a lot of honest individuals out there and what happened was simply a mistake.

He clearly explained to me that my entry was emailed to him by Pizza Hut perhaps as a reference to their newest campaign. Now, I was a bit upset at Pizza Hut for just forwarding my entry just like that without asking my permission. I know that this blog is open for public viewing but to copy and forward an entire article just doesn't seem right.

With two word files in his computer, Mr. Salgado accidentally submitted the one that has my entry on it instead of the one that he personally wrote. Had Pizza Hut have just forwarded the link for Mr. Salgado to view this online, then perhaps the chances of him submitting the wrong file would have been smaller.

My request to Mr. Salgado was simple. 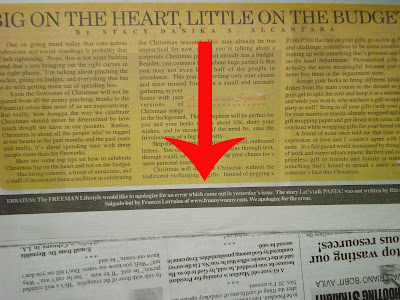 First, to remove the article posted online. Second, to send me the original copy of the issue with the erroneous article and another one with the Erratum written on it.

He complied with my two requests and I truly forgave him.

While I may have forgiven Mr. Salgado, this does not mean that the same treatment and response will be given when done the next time. Plagiarism is a big thing and for me, it signifies total disrespect towards the author or creator of whatever was copied. While the Internet is a big wide world where people can just copy something off with just a few clicks, we all have to bare in mind that bloggers or online writers/photographers/artists are just like your traditional media personalities, we give just the same amount of importance to our works and we pour our heart and mind into every single article that we come out with.

As bloggers, we also have to be careful in the things we post online. I remember a conversation that I had with a fellow blogger who got so pissed off because another blogger copied quite a huge chunk of text from his blog and when confronted the plagiarizing party did not offer any apology but instead just gave a nonchalant reply that he must just have the same thoughts after reading my friend's blog over and over again. After hearing this I was infuriated! How dare can he just shrug off my friend's confrontation. My friend, being the kind soul that he is, just let this issue go despite getting upset over what happened.

As we are all in just one blogging community, let us help protect each other by making sure that every article written is truly ours and that we give due credit to borrowed materials at all times.
bits and pieces forgive philippine star philstar.com pizza hut plagiarism rants ritche salgado the freeman