April 18, 2011
It's funny that while I've been blogging for years and has been trying to keep myself updated social networking-wise, it was only recently that I finally discovered the world of Twitter. I know that Twitter has been around even before Plurk did but I never thought it would be so much fun to be a part of it. Thus, just about a month ago, I created my very own Twitter account and has been tweeting non-stop with friends and fellow bloggers.

One thing that I love about Twitter is that I get to reconnect with my old high school friends. We get to be updated with each other's day-to-day activity and it's easier to plan a get-together given how fast the response rate of Twitter is. Needless to say, we get to communicate in real time without any cost.

While tweeting each other one weeknight, we decided to meet up for dinner. Me, being the official reunion organizer of the class, took charge of pulling everyone together for our first ever tweet-up. It has been a while since I've seen my classmates..more like 9 months ago exactly on my wedding day. I miss hanging out with them as we share stories while our husbands would just happily listen and insert funny comments here and there. 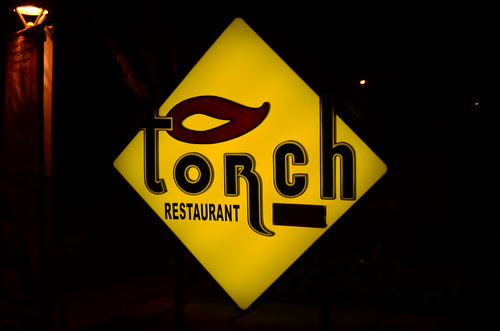 Dinner was set at Torch Restaurant in Greenhills where its most accessible for all of us. Torch has been on my list since Mommy told me about it a few months ago. Sadly, I heard it closed down due to the noise coming from this resto-bar that has been disturbing the village behind it. I'm glad though that they've re-opened and decided to drop the bar and just make it into a restaurant...or so I thought.

We all agreed to meet at 7PM to be able to have more time to hang out. However, work, mommy duties and traffic all brought us together at Torch a little past 730PM. 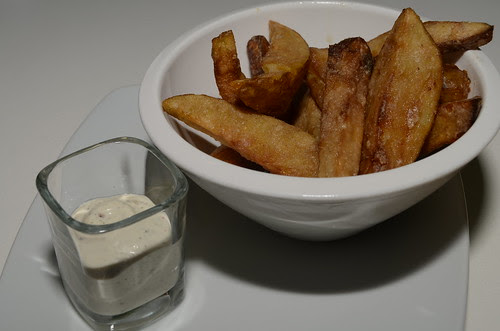 I was surprise that the interior was bright. Nothing that resembles that of a bar. Immediately I concluded that it can pass as a family-friendly place. It was just the four of us there so we decided to just order some starters while waiting for the others. Kell and Rex got the Truffle Fries (Php. 234.95) which had a couple of chubby hand-cut fries seasoned with what could be truffle salt. It comes with a little saucer filled with garlic aoili. I can immediately smell the truffles the moment the fries were served on the table but I can't seem to taste any even after several bites. It's quite weird, don't you think? The garlic aoili lacks the kapow effect that I was looking for. Nothing still beats Cibo's garlic aoili which has been my favorite for years.

Paul and I, on the other hand, chose the Shrimp Popcorn (Php. 274.95). You see, I heard that it's the Peppermill Catering handling Torch and after dining there during the Pond's event, I wasn't able to try any of the dishes served as I was feeling not so good then so the Chef graciously prepared a whole new menu for me which had no carbs, no oil, less salt. Shrimp popcorn was one of the starters served to my fellow Neutrogena Fine-Fairness ambassadors then and all I can do was to stop drooling as I watch them enjoy a piece or two. 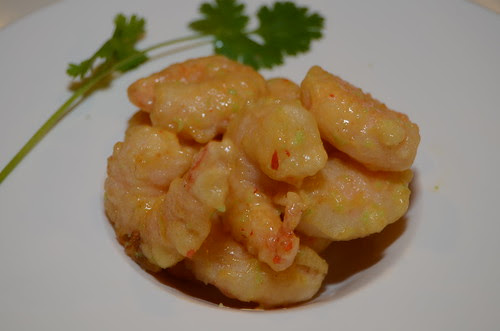 Finally it was my chance to try the Shrimp Popcorn and despite the P200+ price tag, I was able to convince Paul to get this for our appetizer. Then came around 8 plump shrimps on a big white plate. I like the clean presentation but of course what matters is the taste of the food. The shrimp was crisp and juicy but once again lacking in flavor. I even tried slicing it into two to be able to let the taste come out but there was not. It felt like eating sweet and sour crispy shrimps minus it being sweet and/or sour. *sigh* We were quite disappointed given that it was a bit expensive for a starter plate.

Around this time, everyone made it to Torch and all you can hear are voices as everyone's busy exchanging stories, laughter and updates. Yes, this is a normal scenario when former high school classmates from an all-girl school decides to catch up with one another. 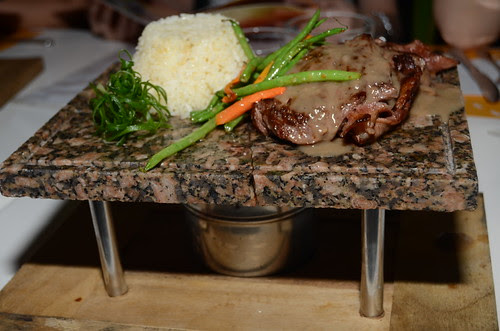 For our main course, Paul and I shared the Salpicao Medallion (Php. 449.95) as the server told us that it's good for two. I was impressed with the presentation as the two medium-sized cuts of steak was placed on top of a stone-grill and served still sizzling and cooking. It also comes with a generous serving of veggies and a cup of parsley rice. We were hungry that evening so we got another order of rice so no need to share. 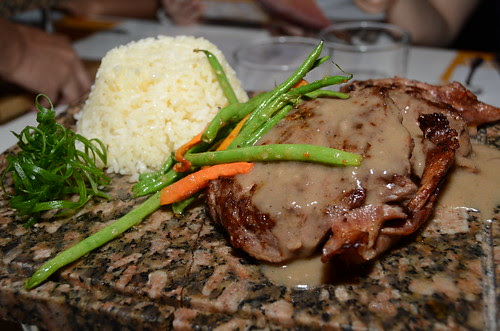 The rice was delicious, lightly buttered and cooked with parsley. The veggies were crisp and buttered too. As for the steak, it looked pretty good but sadly it was just a-ok in taste. I forgot to specify that I want my steak medium well meaning no blood oozing out of my meat but I wonder how come the server didn't bother to ask me either. For one thing, we were expecting the salpicao to come in tiny cubes similar to how we'd have it in other restaurant. I cringe as I saw blood oozing out in every slice that it's starting to drip into my rice. Yikes! Paul, knowing I do not appreciate seeing blood on my food, offered to swap his steak with mine. Thank God for giving me the sweetest husband ♥.

It was tender but nothing extra ordinary, I've had way better salpicaos or steaks elsewhere. I guess they have to improve on the rub or marinade more.

Browsing through the site of my fellow blogger, I realized that we should have ordered their pizza instead because it seems to be pretty good. Well, I'm willing to give Torch another try and maybe I'll just go with the pizza next time.

Even after our plates have been wiped out, we decided to stay and chat some more. We were surprised that come 10PM, the lights were dimmed and the music turned from mellow to loud bar music. Well I guess, they have decided to just keep the bar scene inside to avoid getting complains from the neighborhood but for families dining there, better leave before 10 to avoid the dark, loud ambiance. It was pretty a struggle trying to listen to my friend's story as her voice was being drowned out by the loud music.