Sunday brunch at The Beast : Southern Kitchen and Bourbon Bar

- April 27, 2015
If there's a popular term called "ladies who lunch", I think the Normanton Kids will start a new trend of "Friends who Brunch". I've mentioned a number of times here how much I love going out for brunch. It's just the perfect meal where you don't really have to wake up so early to eat nor do you have to wait so long for lunch hour to arrive. Well, okay maybe for this particular time, we actually got to the restaurant a bit late but luckily, brunch here in Singapore runs till 3pm! Indeed, I'm living in a country who takes brunch pretty seriously. 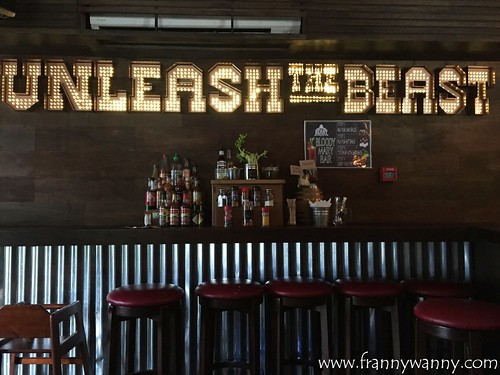 Once again, we checked out another Entertainer App merchant called The Beast in the Bugis district. This restaurant specializes in Southern American cuisine so think of rich bbq-tasting dishes, a great use of corn and fried chicken! It's a nice two-storey resto-bar where you can enjoy a mix of Southern-inspired dishes with their signature drinks too. For one thing, they boasts of having the widest selection of bourbons in Singapore as well as American craft beers and cocktails too. 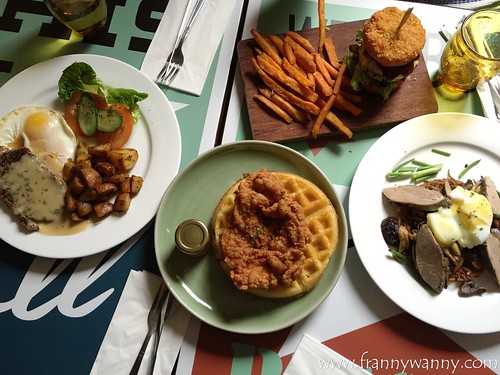 As for the food, the brunch menu was quite simple with a total of 8 main entrees to choose from. We got 5 out of the 8 entrees to share family-style. This is why I love the Normanton Kids, we all share the same love for food so the idea of sharing to try more dishes came pretty naturally (or quite instinctively, if I must say).

Let me start with the dishes that I loved the most: 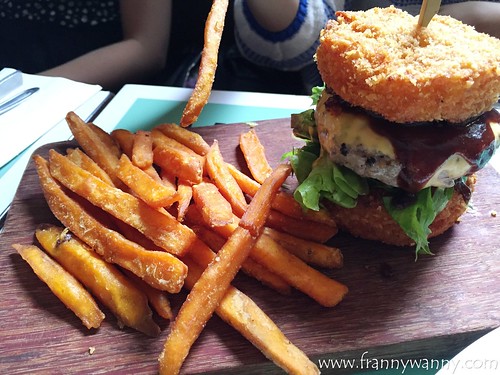 Mac & Cheese Burger (S$22)
This was I's choice and it was really a winner! Imagine a thick, juicy beef patty sandwiched in between two deep-fried mac and cheese "buns". Topped with a dollop of bacon jam and bbq sauce and served with crunchy sweet potato fries. First, I love the beef which was perfectly grilled that it stayed juicy all throughout. The mac and cheese "buns" was a work of genius. I love mac and cheese and I really think it went so well with the meaty burger. Despite being deep-fried, the cheezy flavor was still kept intact. The mixture of the bacon jam and the bbq sauce made this dish even more flavorful and you'll really want to have that good bbq taste in every slice. I fell in love with this dish the moment I had my first bite and I know that this is one that I'll definitely be getting again on my next visits. 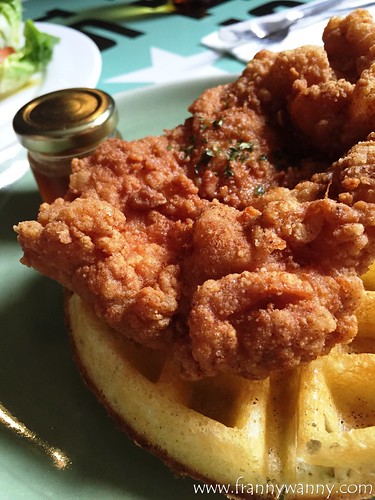 Chicken & Waffle (S$20)
To be honest, I wasn't too sold about this dish when I first read the menu. The first thing that entered my mind was "this must be really oily!" Well, after seeing a couple of Chicken & Waffle plates served to our neighboring tables, we decided to give it a try. Since you can choose between thigh or breast part, we agreed to just get one of each as half of the group are thigh fans while the other half loves the breast portion. As soon as this was served on our table, we were all surprised by the size of the chicken. It was HUGE! The thigh portion for example was just as big as my hands! Can you imagine?

As soon as I had my first bite of the tender chicken, all my doubts about this dish immediately vanished. It was deep-fried but definitely not overly oily. It had the really good crunch that even people like me who removes the chicken skin still enjoyed those crispy edges too. The waffle was pillowy soft inside and crunchy on the outside. The best way to enjoy this was to drizzle some bourbon maple butter sauce before taking a bite. You'll love the sweet buttery flavor on both your chicken and waffle. Ohhh..heaven ♥ 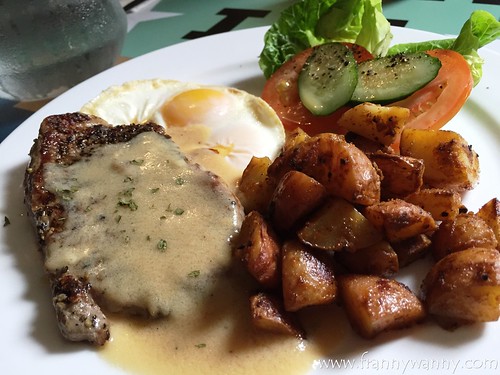 Steak & Eggs (S$22)
O chose the Steak and Eggs which I think is also a must-try. If you love peppery-flavored steak then this is the dish that you should order. The steak was perfectly tender and the gravy made it creamy without overshadowing the main star of the plate. The home fries were quite unique too. We noted some hint of tomato flavor on the diced potatoes which was really yummy. 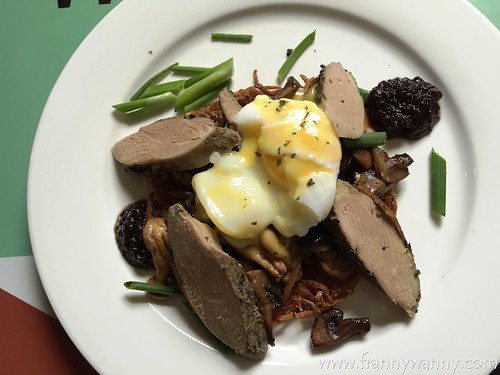 Duck Hash (S$20)
As I was choosing what to order, I was initially torn between the Duck Hash or the Pulled Pork Hash. I'm glad to have C and I who suggested that I go with the duck because it's served with balsamic cranberry sauce which sounded way more interesting than the regular bbq sauce that the Pulled Pork Hash was served with. They're right and I'm really glad I took their advice.

This dish was good over-all but what I just felt like there's a lack of unity among the three main component of the Duck Hash. First off, the pan-seared duck breast was really bland and a bit dry. Despite eating this with the crunchy potato hash, the balsamic cranberry sauce and the mushrooms didn't hide the obvious fact that it was really dry and blahhhh-nd. The hash brown was good but it seems like it had a mind of its own and failed to blend perfectly with the sauteed mushroom, the runny poached egg or the sauce. The same goes for the rest of the ingredients. Alone, it was really good but I really had a hard time enjoying the flavors when put together. Paul and I were thinking, maybe it's best to serve shredded duck meat sauteed in some savory sauce instead of the duck slices. 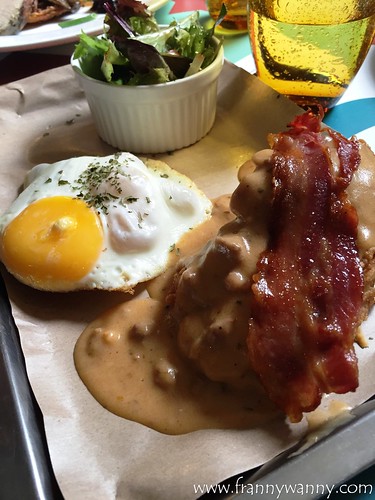 The Big Biscuit (S$22)
In every brunch menu, there's always the big platter. It comes in various names but one thing is for sure, its the hero platter with pretty much everything inside. From hash browns to sausages, to eggs and maybe a generous serving of meat too. This is the kind that boys would normally go for as it's pretty loaded with all things yummy.

The Beast also has their version and it's called The Big Biscuit -- buttermilk biscuit, southern fried chicken, sunny side up, bacon strips, pimento cheese and sausage gravy. Sadly though, it looked really small to be called "big" that even the Chicken & Waffles as well as the Steak & Eggs looked way more mighty and grand than this. The biscuit was a bit too dry to be enjoyed and although the chicken was good, the gravy that covered it was too salty for our taste. Needless to say, this was the only dish which miserably failed our expectations that day. 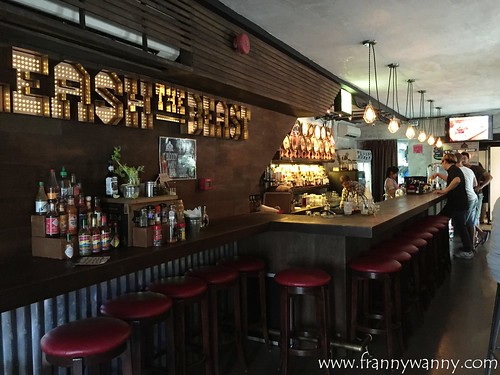 Despite some of the misses, we all had a happy brunch at The Beast and we all can't wait to go back again. Perhaps we'll go back for dinner next time as they have another set of menu and who knows what gem we'll get to discover then. :) The best part is, we all got to enjoy 1-for-1 deals from the Entertainer App slashing our bill total to almost half! We obviously love the Entertainer App for this.

Till the next NKids food adventure!

Check out The Beast : Southern Kitchen and Bourbon Bar at 17 Jalan Klapa, Singapore. I highly recommend for you to call to make a reservation. Call them at 6295-0017.
1-for-1 bourbon brunch chicken and waffles entertainer app jalan klapa kampong glam normanton kids singapore southern kitchen the beast the entertainer