[ Event Alert ] Are YOU ready to be your own BOSS?

- September 02, 2010
This year has been a busy one for Entrepreneur Philippines. It all began with our 1st Networking Night featuring three of the well-respected entrepreneurs in the food industry. Readers of the magazine all trooped to 360 Resto Bar at A.Venue for an evening of learning from the experts and building their contacts.

The second one was all about the Franchise Business and despite having a typhoon that evening, Amber Lounge was still filled with participants eager to learn and interact with one another. 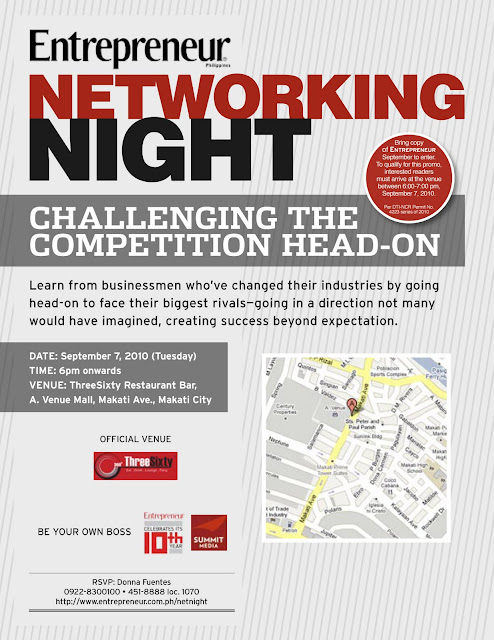 We're nearing the end of the year and with that, Entrepreneur Philippines be having the last Networking Night focusing on the Innovators -- Entrepreneurs who took up the courage to face the industry giants and succeeded in their own way. It's an interesting mix of a gas provider, a business innovator and a well known salon catering to the mass market.

Get to know them on September 7, 2010 (Tuesday) from 6PM onwards at the 360 Resto Bar at A. Venue Mall along Makati Avenue, Makati City. To enter, all you have to do is to sign up online and to bring a copy of the September issue of Entrepreneur Philippines.