- August 18, 2014
I'm so lucky that the people that Paul and I hang out with here in the Lion City also share the same amount of love and fascination for food. Take our friend O for example, every time we plan to go out, he manages to recommend a good place to eat. 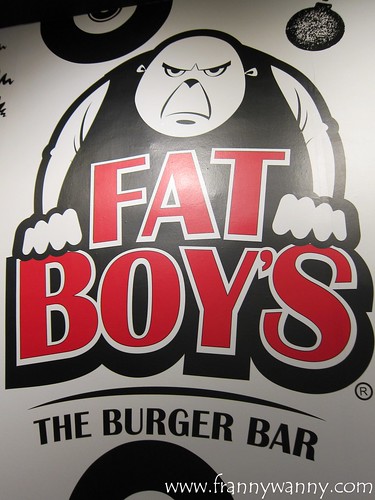 A few weeks ago, the initial plan was to have pho for dinner but O suggested that we check out this newly opened burger place called Fat Boy's The Burger Bar that's just a block away from Plaza Singapura. It's a good thing we got there a bit early before the dinner crowd arrived as the place was quite small and can only sit a little more than 50 guests. We definitely wouldn't want to stay outside and to queue up while watching everyone enjoy their burgers. 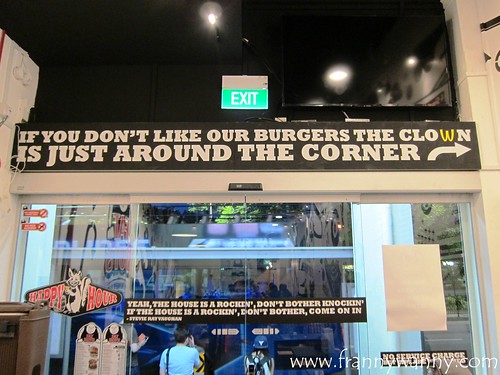 Upon entering the restaurant, the first thing that caught my attention are the somewhat cheeky humour that you can see from their signages, wall statements and posters. Definitely not for the spoilsport! It's a reminder that you're in for a good time and some laughter while enjoying your meal. 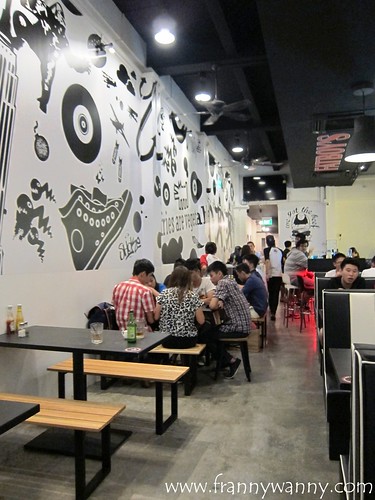 I'm loving the black and white decor inside!

On to the food, the menu is simple. There's a list of special burger combinations to choose from or if you're feeling adventurous, why not create one for yourself? We didn't want to end up with a so-so burger and regret it later on so we trusted the burger experts and went for the Specialty Burgers. 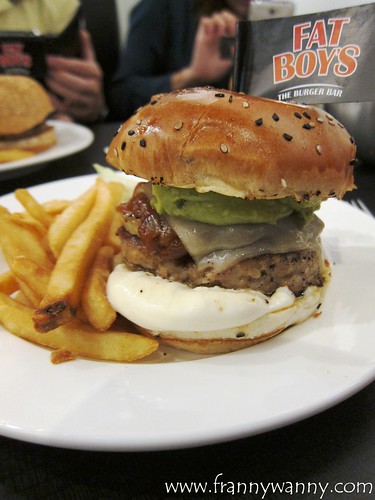 Paul and I had a heavy snack prior to visiting Fat Boy's so we agreed to share on a burger and have some salad to lessen the guilt. Since we love anything with pineapples, we tried the Mahalo (S$12.50) which is a thick bacon stuffed pork patty topped with caramelized onions, grilled pineapple, melted Monterey Jack cheese and creamy mayo all in between a Sesame Seed Bun.

When our burger arrived, the first thing that I noticed was that white glob that's spilling out from the burger. "What's that?!" I asked Paul. Initially we thought it was the melted cheese but after trying it, we realized that it was mayonnaise! For the record, yes we don't mind having mayonnaise but this was a mayonnaise explosion! Looks like the burger chef went mayo happy in the kitchen. I had to scrape a good amount off as it was just too much for us. Ugh, this was a bit of a turn off. :(

Moving on to the burger patty, it was tender and well cooked. A bit on the dry side as there's no way to cook pork medium well or rare. We hardly spotted the bacon which was said to be stuffed in the patty. Over-all the burger was just okay. Nothing spectacular about it save for the yummy sweet taste of the pineapple and caramelized onions combined. 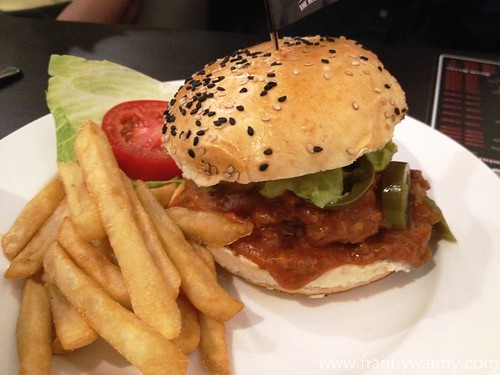 Over to our friend I, she tried The Burgatory (S$13) which is a beef burger filled with spicy Chili Queso, spicy jalapenos and for added Mexican flair, an additional order of Guacamole. She enjoyed her burger and said that while the ingredients were something expected and quite ordinary, it's the combination of all these that made her burger experience truly remarkable. Go for this if you can take spicy food!

Meanwhile, O tried The Elvis (S$11) which was an interesting mix of bacon stuffed pork burger with grilled bananas and creamy peanut butter. I got to hand it to O who was adventurous enough to try such a unique combination. He's a big fan of peanut butter so he quickly zeroed in on this the moment he read it on the menu. According to him, this is an upgrade of our childhood favorite -- Peanut Butter Sandwich. It's for those who are fans of sweet-salty food combinations. 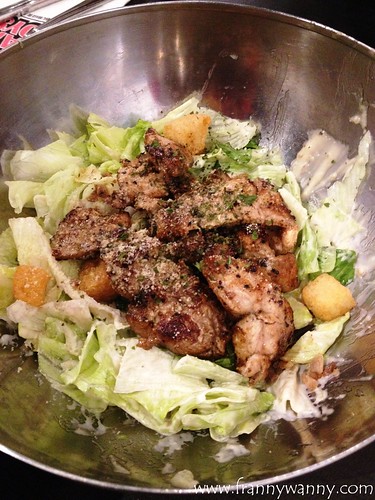 As for our salad, there were only two options on the menu -- Chicken Caeser Salad (S$11.50) or Southwest BBQ Salad (S$12.50). We opted for the former and were quite pleased with the generous serving of fresh lettuce tossed with grilled chicken fillet, parmesan cheese, chopped bacon and their homemade caeser dressing. I actually enjoyed my salad more than the burger.

Aside from their burgers, they also have milkshakes and a variety of side dishes too. So, will I give go back to Fat Boy's? Maybe. Perhaps next time I'll be brave and put together my own burger creation.