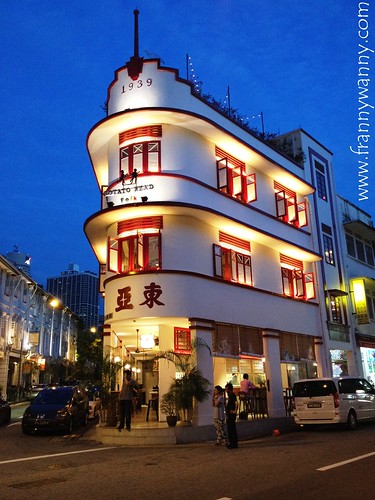 I think I must have uttered this line more than a dozen time last Tuesday night when my colleagues and I decided to have dinner at Potato Head Folk along Keong Saik Road -- a quick 10 minute walk from our office. I was at awe upon seeing this tall 4-storey white and red shophouse at the corner of the road that somehow reminds me of a ship. I don't know why, blame my hyperactive imagination. :)

People who have visited Bali must be familiar with the name and yes, this is from the same group that runs Potato Head Beach Club in Indonesia. I personally haven't been to Bali, but I've been hearing a lot of good things about it. 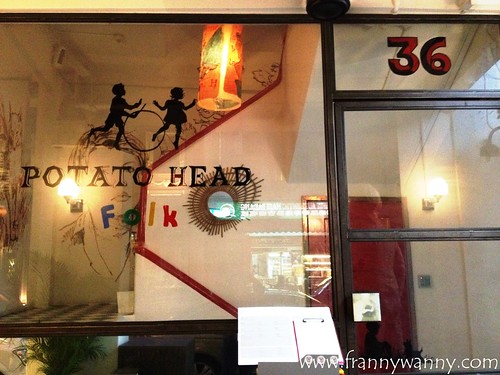 Potato Head Folk in Singapore is divided into three establishments -- Three Buns Kitchen, Studio 1939 and the Rooftop Garden. Each establishment occupying one entire floor and each carries a different vibe unique from each other. That evening, our dinner was set at Three Buns Kitchen so this is where this blog post will center on.

Located at the second floor of the shophouse, you'll surely be amazed at the colourful grand decor found all over the restaurant. From giant statues to pretty white and blue painted walls. It has a very whimsical feel where they made use of curated art pieces put together in such an organized chaotic manner. No two table set-up is the same and since reservation is not allowed, we were lucky to immediately get a nice table for 6 given that the place was packed on a busy Tuesday night. 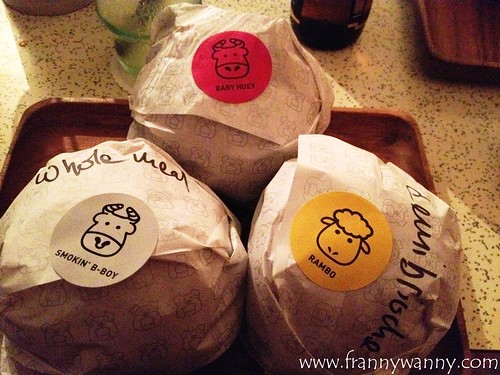 The menu was very straight-forward. Three Buns Kitchen specializes in burgers and they basically have covered more of the meat groups. Ask for it, they probably got it -- beef, chicken, lamb, fish and vegetarian burgers. I had to concentrate and read the menu carefully as each sounds so good and I can't be greedy and order all, can I? So, it was a toss between Rambo (S26) which is a lamb burger with feta cheese, aubergine pickle and aioli sauce or the Smokin B-Boy (S$28) which is a 150g prime beef patty with double smoked cheese, cured bacon, BBQ ketchup and mayo. The thought of having bbq burgers appealed to me more so I went for the Smokin B-Boy. Look at how they label each burger! It's so cute, isn't it? 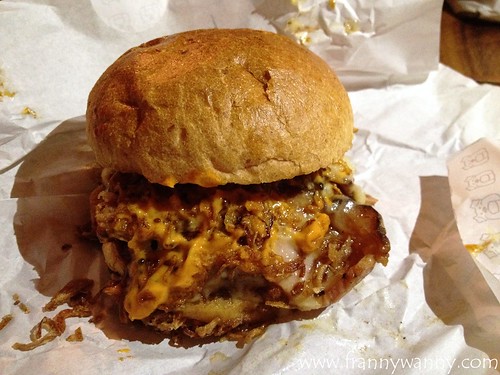 Take a peek at my burger! It's so beautiful! These you go, I just said the phrase again! I have to admit I'm not a big burger fan but I do know what's a good burger once I've seen and tasted one. This one is amazingly delicious! The meat was so tender and grilled medium well just I asked them to do so, the sauce was so rich and flavorful that I didn't mind licking my fingers as I don't want any of it to go to waste. Of course, what's burger without cheese and while bacon is not something I would go crazy over, I love how smokey it tasted that it brought this burger to a whole new dimension! Oohhhhhh.....♥

Did I just gush about a burger? 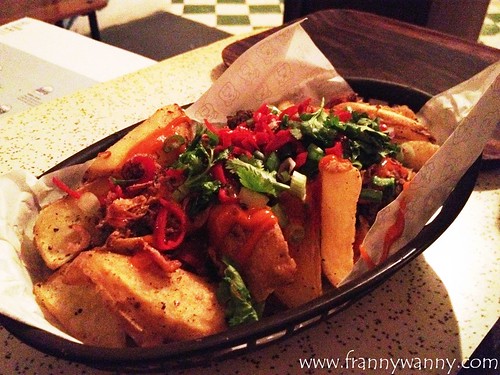 Actually while waiting for our burgers, we happily munched on some of the starters such as the Naughty Fries (S$10) which my colleague P got for all of us to share. This was a perfect choice! Initially I was scared that this would be incredibly spicy but I was so happy that the chili was just sprinkled on top so you can actually opt to not touch it if you don't want the heat. The thick-cut fries were fried to perfection keeping it crisp even after topping it with spiced Bearnaise sauce, hot beef chilli, crispy shallots and parmesan cheese. Maybe on my next visit, I'll request to order more as it would also go so well with the burgers. 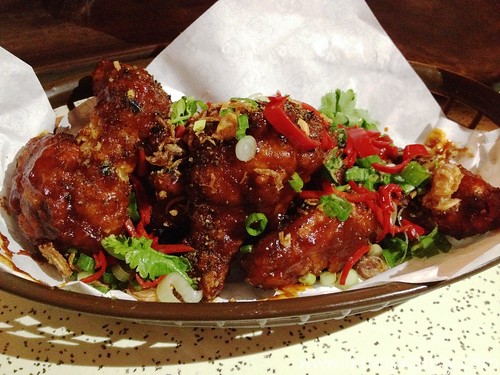 We also tried the Wing-Its (S$10) which are buffalo wings coated with a sweet and smokey BBQ sauce. I know the right way to enjoy this is to use your fingers but I wasn't in the mood to make a mess that evening so I put on my prim and proper hat and ate my wings in the most lady-like manner possible. 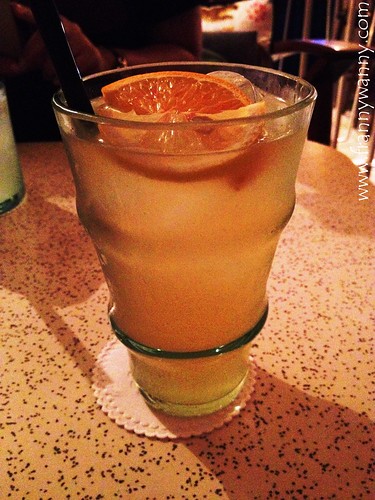 Of course, we just have to end our meal with desserts. Not quite sure what to get, we decided to get all three! Yes, 3 Pot Heads as the menu calls it. We all love how they have put in so much effort in name their menu items and some are really cool! Take for example P's drink which is called Queen La Tea-Fah. This is a mixed drink of vodka, Lady Grey tea syrup, berry reduction, apple, rhubarb bitters and lemon. It was way too fruity though that P felt the alcohol should have been stronger. I got the Sherbie Hancock, a non-alcoholic lemon drink infused with grapefruit and oranges too. It was refreshing, but I would have preferred it to be more sweet. 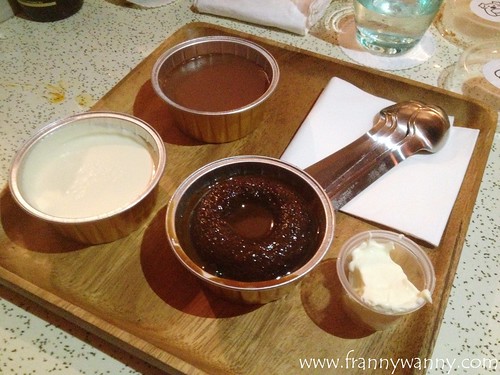 Okay, going to dessert. We tried all three such as the Rich Chocolate (S$4), Zesty Lemon (S$4) and the Sticky Icky Wicky (S$6). All three came at the same time and we quickly attacked...well at least after they allowed me to take a couple of photos. I tried the Zesty Lemon first knowing it has the lightest flavor notes. I love how citrusy it was but created as a custard. Actually, the moment I tried my first spoonful of the Zesty Lemon, I knew I just had to bring some for Paul to allow him to try it too.

The Rich Chocolate is the kind of chocolate pudding that you don't mind indulging in on a lazy weekend. It was creamy yet not too overpowering and bitter too. Kids will love love love this! Meanwhile, the Sticky Icky Wicky isn't icky (eeky) at all! It was so delicious that we all went "mmmm" after taking our first bite. Served warm with caramel syrup oozing out, it's the perfect dessert to end such a great meal.

Will I go back again? Definitely! In fact, I've been bugging Paul to come with me on my next return. This time I'll try Rambo or the other burger option too!

p.s. thank you Preethi for the photo and to LW for providing me the proper lighting that evening :)