- August 02, 2010
It was a bright and sunny morning as Paul and I made our way to Universal Studios Singapore.

Going there was a breeze, we took the MRT all the way to Harbourfront which was adjacent to a mall called Vivo City. Just follow the directional signages leading you up to the top level where you can buy your ticket to ride the Sentosa Rail for only $3/round trip. 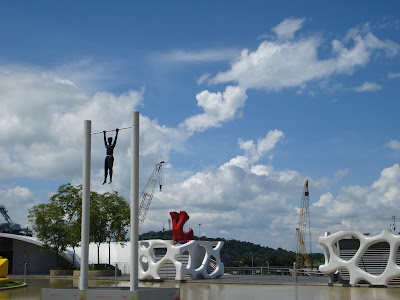 While waiting for our train to arrive, we walked around the outdoor deck and marveled at the cute artsy decors that they have installed for both kids and adults to enjoy. From the balcony, you'll see the signage that says Sentosa.

On board the Sentosa Rail, you get to choose any one from the three stations where you want to alight. All passengers heading to Universal Studios and Resorts World will have to alight at the Waterfront Station.

Another way to get to Sentosa is through the Cable Car. You have to go up to Mt. Faber where the terminal is located. However, this is not advisable for those who are afraid of heights as the ride can take you approximately 5-10 minutes. Otherwise, it is also a relaxing way to start your Sentosa adventure. 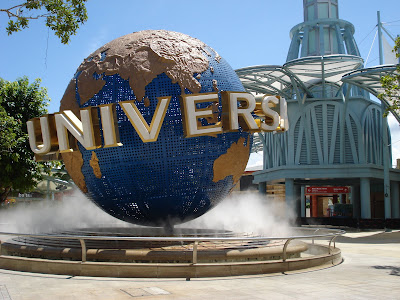 We didn't have to line up for our tickets as we have bought our tickets online. The price was just the same ($66 for the weekday pass and $72 for weekends). We just presented our printed ticket and with just a few beeps and clicks we were finally inside the park! As a bonus, we were directed towards the guest relations office to claim our $5 meal and retail voucher.

To ensure that we will be able to efficiently navigate our way around the theme park, I grabbed a map that will serve as our ultimate guide for the day.

First off was the Hollywood Strip where we went in and out of shops selling Hollywood memorabilias and more. There are also a couple of restaurants here as there are in the different sections of the park. 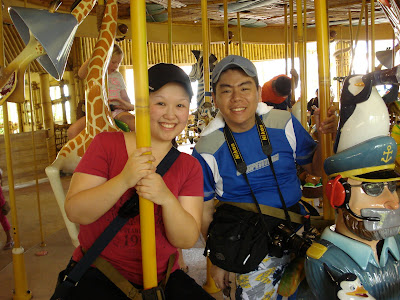 We took a left and found ourselves transported into the Safari-like Madagascar. Our first right was the King Julian's Beach Party-Go-Round which was way more fun that your average carousel ride. You get to disco and dance as you go round and round the merry-go-round! I was actually enjoying the ride that I felt sad when the music stopped. 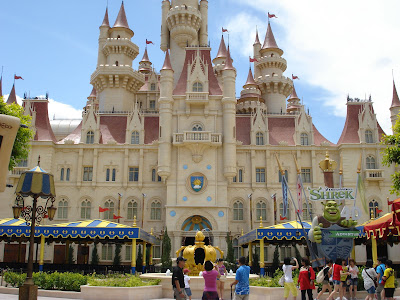 Walking further down, we found ourselves in front of a majestic castle very similar to that of Cinderella's but it has that lovable ogre's face in front. Yes, it's Shrek and Princess Fiona's castle! We were now at Far Far Away land. I grabbed Paul's hand as I excitedly entered the palace. Inside, we had a blast as we went through the Shrek 4-D Adventure. I even felt donkey sneeze!

It was almost 2PM as we exit the castle and I can feel my stomach rumbling. I initially wanted to try Goldilocks (not the bakeshop here in the Philippines) and its 7-spice giant chicken drumstick that looked oh-so-delish! However, Paul still wanted to explore The Lost World before we finally grab a bite.

I'd say the timing was just right as we found out that we were just in time for the WaterWorld show. While the show, which was adapted from the movie, was a bit too violent for my taste, I marveled at the sight of a real fighter plane landing right in front of us. 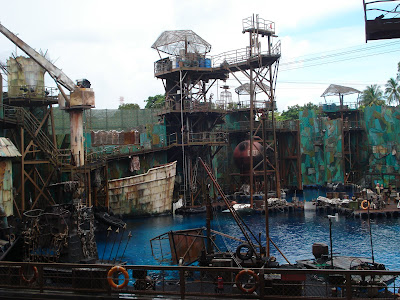 This is perfect for those who enjoyed the movie as you get to watch death-defying stunts and awesome explosions happening right in front of you. 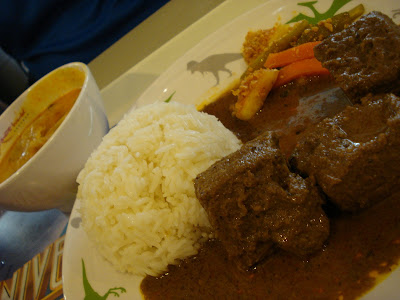 Finally, the show has ended and we found ourselves back at The Lost World. We ended up having lunch at the Discovery Food Court where you can choose from an array of Singapore local dishes like the Hainanese Chicken Rice, Noodles and in our case, the Beef Rendang. Don't expect much though as I'm sure we could have gotten a better version of the Beef Rendang outside.

After lunch, we headed towards the much-awaited Jurassic Park Rapids Adventure. We've been hearing so much about this ride that we actually went prepared for it. Knowing that we could get wet, we brought an extra set of clothes each. Paul went the extra mile by bringing his raincoat too. The waiting here was longer than usual. It seems like a lot of visitors also wanted to try this out. I will keep the suspense of this ride but I just have to say that you will definitely get wet. This ride is also not for the claustrophobic and dino-phobic. It was a fun ride and I will definitely go back to Universal Studios for this. 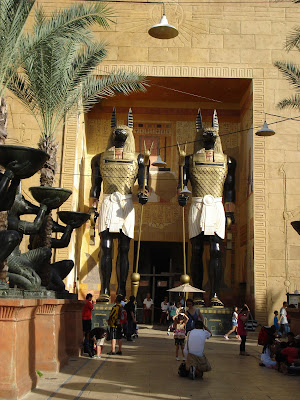 After changing into our new set of clothes, we continued our Universal Studios journey as we entered Ancient Egypt. 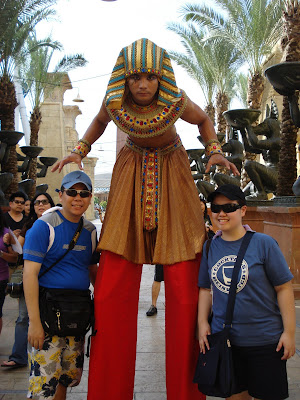 Another much-talked-about ride here is the Revenge of the Mummy which is an indoor roller coaster that will definitely test your courage. 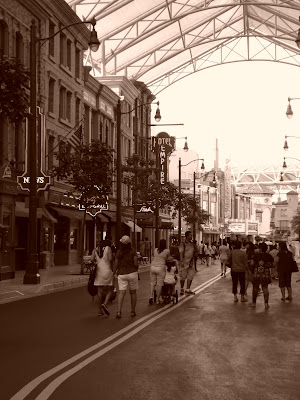 Our last stop was at beautiful New York where we took more photos of the shiny yellow cab, the New York theater and a lot more. Being fans of Steven Spielberg, we entered Lights, Camera, Action! which was hosted by no other than Steven Spielberg himself. He showed us how sound effects can create a scene showing a major hurricane about to hit New York City. It was amazing! 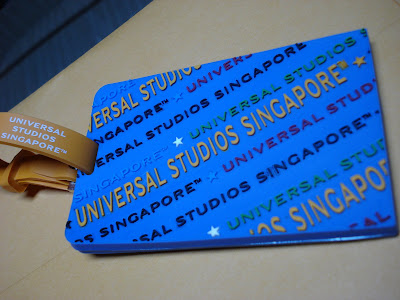 Finally, we were back at Hollywood and the day was about to end. Before leaving, we made it a point to stop by the souvenir shop to use our $5 voucher for a nice item that will remind us of the fun adventure that we had at Universal Studios. After going through the racks, we decided to get this cute luggage tag that we will bring with us as we continue to travel all around the world.

Visiting Universal Studios is definitely a must when in Singapore. Be sure also to check out Resorts World which is located right beside the theme park. While the park may not be that big, it's filled with a lot of attractions that it's best to reserve one full day here.

Lastly, as the theme park closes at 7PM, take the Sentosa Rail and head to the Beach Station to catch the Songs of the Sea laser and fireworks show. This is a perfect way to end your fun adventure at Sentosa Island.