- January 07, 2015
Allow me to skip from telling you about my first day in Manila straight to my last day before flying back to Singapore. Don't worry, I promise to fill you in on all the food adventures that we had in between. It's just that my last day was quite amazing even if it means having to hug my family tightly as we bid each other "see you soon" as they sent us off at the airport. 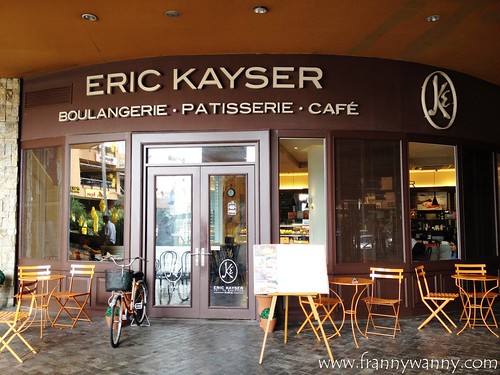 So, my day started early as Pan and I headed to our favorite salon for my mandatory hair cut and mani/pedi session. I have been putting this off all throughout the trip that I had some sort of panic a few days before flying back when I realized that my hair was in bad bad shape. As for my nails, they've grown so long that I once scratched myself accidentally. Pan sensed the urgency and gamely joined me for our 9am appointment that day. After an hour and a half we were done and she invited me out for breakfast.

Of course, I was game! If only I can have breakfast with my sister every single day, that would be really really great. We headed to Greenhills Promenade and she led me towards Eric Kayser Cafe. It has been opened for almost a year but I never found the chance to try it out myself. Look how inviting the bread shelf was! I couldn't really choose which one to get as everything looked so yummy. 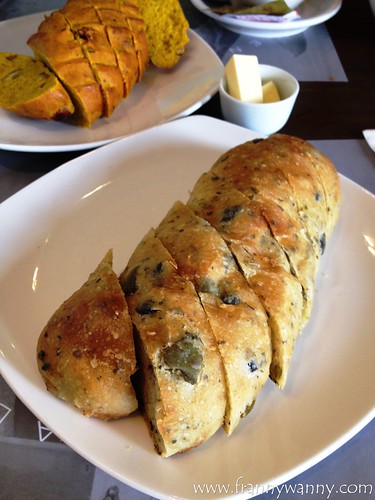 Pan raved about the Olive Ciabatta (Php. 120) which she said was so delicious that we can enjoy it on its own. I normally like my bread with butter so I'm glad that the server offered to give us a couple of slices of butter too. 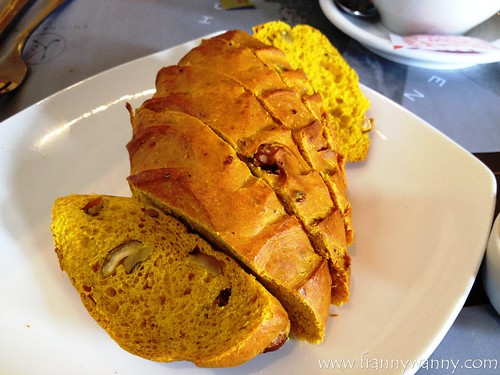 After playing a round of eenie-mini-miney-moe, we went for the Viennoise Curcuma (Php. 90) for our 2nd bread. It has a similar baguette-like shape as the Olive Ciabatta. What attracted me to it was that it's a turmeric bread with whole hazelnuts in it. Quite interesting, don't you think? 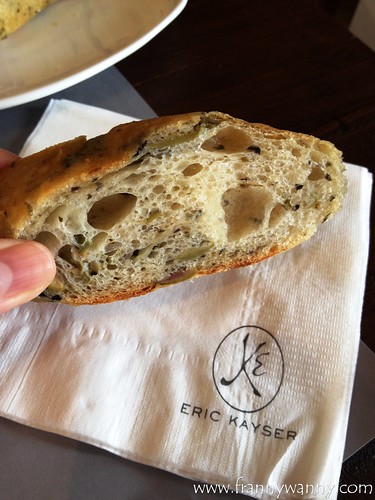 Pan was right, the Olive Ciabatta was DELICIOUS. Crunchy on the outside and super fluffy and soft inside. Ohhh it was so addicting! Actually, the butter was no longer necessary as we can't stop having a piece of bread after the other. The olives were plenty but not very overpowering. I love this very much!

As for the Viennoise Curcuma, it was equally good but I feel that the taste and flavor was on the weak side. I was expecting one with strong turmeric flavor but I could hardly detect any. I do love the nutty texture of the bread though which would probably go so well with fruit jam instead of savory butter.

I love the French chic design of the cafe. I will make sure to go back should I be in Manila to try their sandwiches and breakfast item too. It's just so cool that more and more foreign food brands are making their way to Manila. The good news is, there's also an Eric Kayser bakery here in Singapore so I can easily get my fill of that delicious Olive Ciabatta whenever I want to. Hooray!